Having talked with Nicole, the B&B hostess yesterday in person and her husband, Frédéric, on the phone we had detailed instructions on how to drive to the end of our first day and then take public transit to our beginning point. We had decided to leave about 9:30 to avoid the Montreal rush hour but left just a bit early to be on the safe side. We had some discussions re the best route to drive as the given instruction looked to be longer than the Google recommendations but we decided, upon looking at the traffic to take the written instructions from our host. It worked well and we were soon parked a few metres from the end of the day’s walk. We walked to the bus stop, with some help from some neighbours that Fleur-Ange talked to and waited about 20 minutes for the bus. The first bus took us to the Metro Underground where we did the usual rat maze of tunnels above and  underground to find the correct subway. 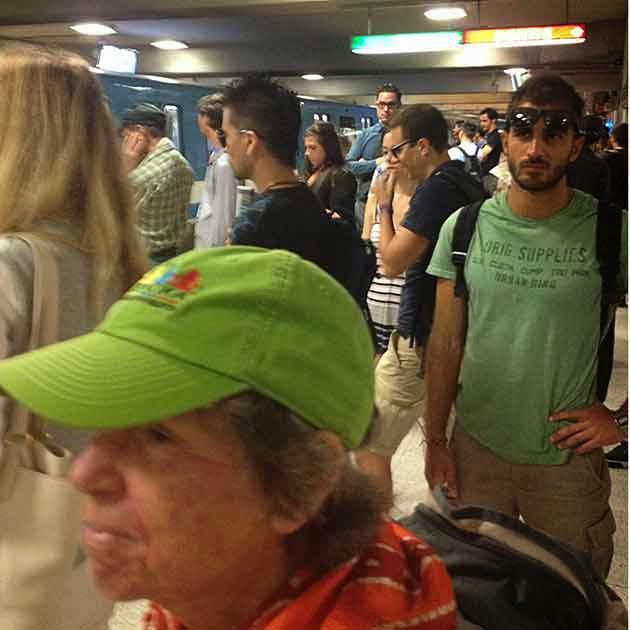 Three stops later, we got to the second subway and then watched as more and more people got on board. Glad we missed rush hour as the cars were quite full even at this hour of the day. When we got off the subway we had to find another bus. In spite of all the instructions, it was still a bit of a challenge to find bus 21. There were lots of numbered bus stops on three streets by the subway exit and, of course, it was he last of our three choices that had our bus. It took us within about 4 blocks of where we wanted to go and, finally, at 11:33, we were off on our walking adventure. 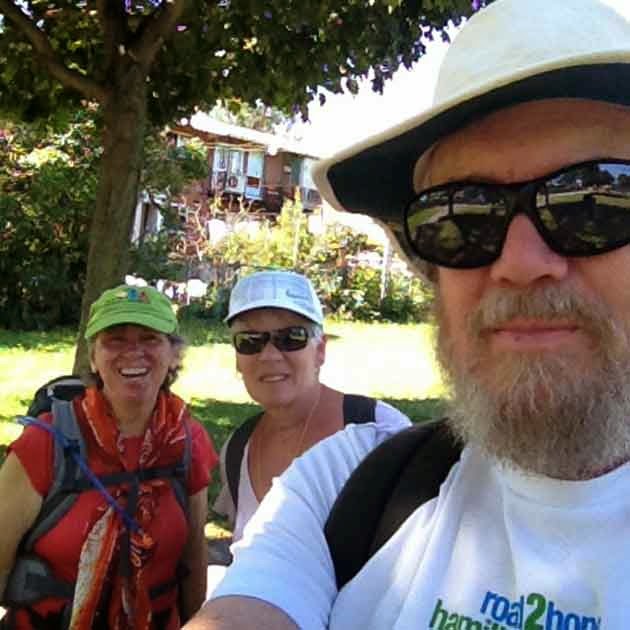 First stop was the park washroom and then onto the streets. We took a side street from Parc des Hirondelles over to one of the main north/south streets Avenue Papineau. At that point Avenue Papineau had a green area in the middle so we chose to walk on the grass with traffic on both sides until the grass disappeared. At times there was a wide grassy boulevard at the side of the street upon which we walked but for the rest of the time it was hard sidewalk.

We had a stop at a bakery for lunch about 1:00 and rested a bit and had some tasty sandwich treats. The cakes and pastries were very tempting but we resisted and got back on the hard sidewalks.

(My leg muscles are used to long distances but I found the sidewalks very hard on my feet and before 10k my feet were burning at times. Fortunately, the feet can only feel extreme pain for a limited time and then the nerves just quit and the pain goes away for a while. Unfortunately, the “whiles” don’t last all that long and the pain reappears. One just carries on.)

The Avenue Papineau part of the walk was almost 9 km long then, after a couple of twists and turns on a bike path we got on the Pont Jacques-Cartier. The bridge was definitely one of the high points of the day for me at least. It was over 3 km long and rose high above the surrounding streets before arching over the St. Lawrence River. 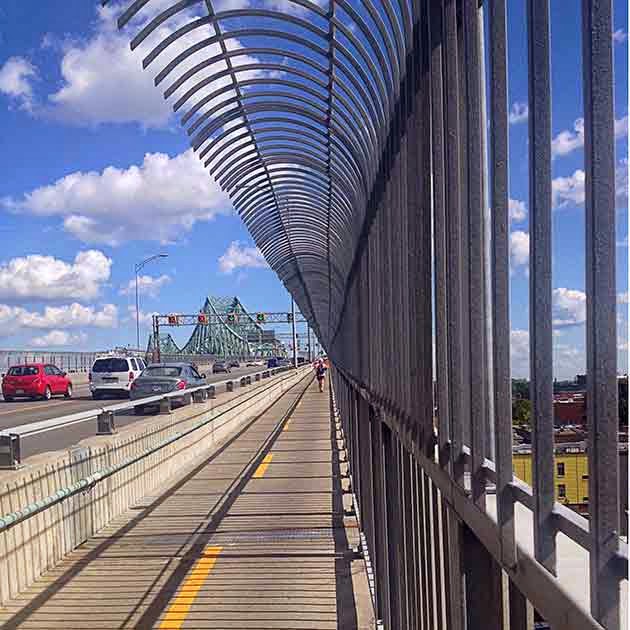 It touched down briefly on the island where the Montreal Expo 67 had taken place and then bounced back up to cross more river and canals and streets before settling down on the far side of the river. 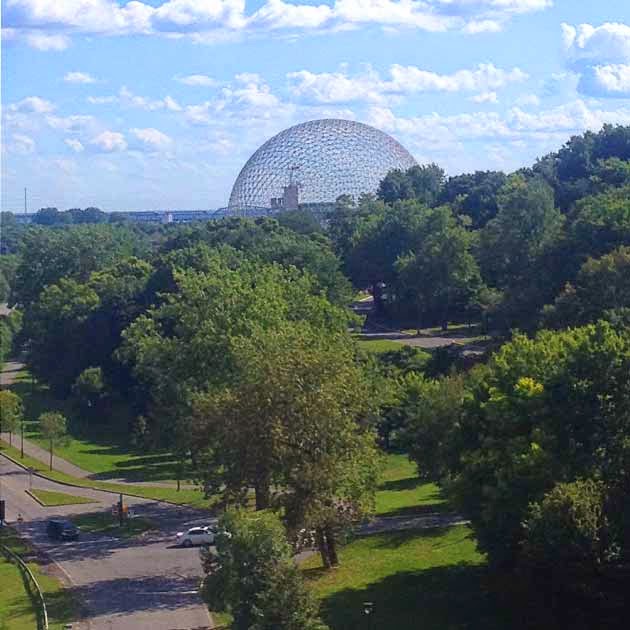 A few more twists and turns on the bike path and we were back on the streets and returned, again, to Rue Papineau for a bit before coming to the Boulevard Jacques-Cartier. I had almost convinced myself that I had made an error in my map work as I could see no way across the Jacques-Cartier but my map work won and we found the street to take us across and onto the last bit of bike trail that returned us to Fleur-Ange’s car.

As I write this in the early hours of Day 2 my feet are still sore so it may be a long day or the start of a series of long days. Time will tell. We also have no wi-fi this morning so I am not sure when this will be posted. (Posted after day 2's walk at 4:30 p.m.)
Posted by Ontario Wanderer at 4:36 pm