Started the day with a 13 km run with my running group. I had the misfortune of being slightly faster than some and much slower than the rest so I did about half of the run on my own. By a bit of creative trail making, I managed to finish about the same time as the runners that ran 2 km further than I did. It was nice to have company for the last few blocks when I was really tired.

After I got home, ate and had a bit of a rest, I took my pruning saw and machete out to clean up more of our trails. We still had several large branches and small trees down across the trails. I managed to get most of the trails cleared with only two hours of work but now not only my legs but also my arms, back, and shoulders are tired. I should sleep well tonight.

Below is a photo from near our east pond pointing back toward the house. No house can be seen through all the ice and snow covered trees and shrubs. It gives a nice feel for what some of our trail look like in winter. 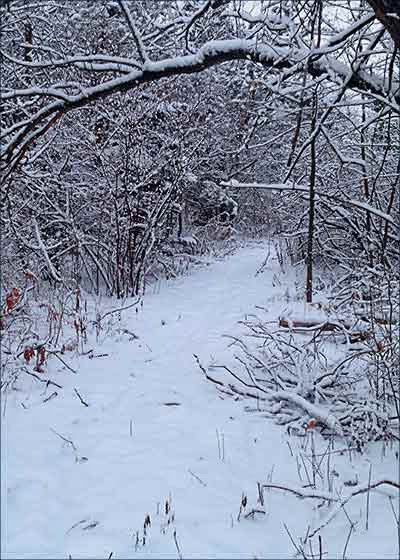 Posted by Ontario Wanderer at 7:31 pm No comments:

We were lucky. It did not seem so at the time as we were without power for over 24 hours but some people in Toronto were without power for over 48 hours and some may wait for another day or two. Compared to them, we were lucky. We also have a fireplace and lots of wood so we were not too cold and I got out the old camp lantern so we had a bit of light too. We have a cistern in the barn so I was able to bring up a pail of water to flush the toilet. I know that  most of the Toronto people do not have such luxuries.

There was a fair bit of tree damage and I know that I will be cleaning up twigs and limbs and a couple of trees until spring time but that means more wood for the next storm.

And I did get some interesting photos after the storm. Here's one: Happy Winter Solstice! We are now on the way to full winter but already thinking of spring. I heard a confused Cardinal singing it's spring song this morning as the temperatures were about 4 degrees above freezing and the rain and mist were coming down. Meanwhile, the weather forecasters are full of doom and gloom and forecasts of ice storms and power outages. Time will tell.

I am thinking about a video about the seasons and to that end have a series of photos of our east "pond." I put pond in quotes as it sometimes is dry for months. We have had years of water all year but there have also been some with more dry months than wet so it is very weather dependant. With one tall willow and several smaller trees and shrubs around it can lose its water very quickly.

Below is a collaged photo of the four seasons at the "pond." 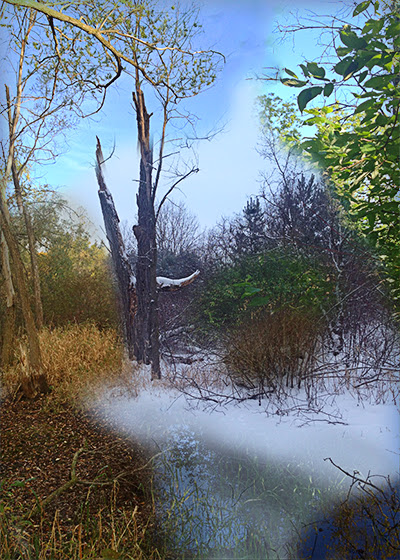 When the dog and I were out for our morning walk/run - I walked, she ran - we found two white-tailed deer in our east meadow. As we went further along we found the places where they had spent time lying down i.e. a pair of deer beds. I attempted to take a photo with my iPhone camera but the photo just did not work. Hard to photograph anything in snow without a good camera and even then it can be difficult at times. I decided to not put up that photo. Maybe another day with another camera I can be more lucky.

I was taking photos of birds at the bird feeder two days ago and managed to get a fairly good photo of a bluejay. I wish it were a bit sharper but it was taken through two panes of glass on the side door so the quality is not quite as good as it could be but it will have to do for now. 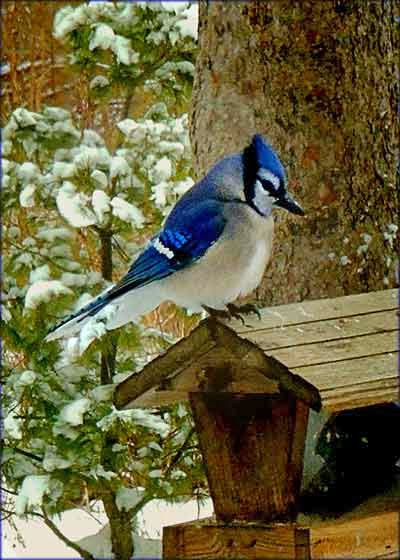 Posted by Ontario Wanderer at 9:56 am 3 comments:

It's another cool day with the temperature hovering around -10 C. The wind chill is again in the -20 range. Meanwhile back at the bird feeder the Red-bellied Woodpecker has come in for some food. 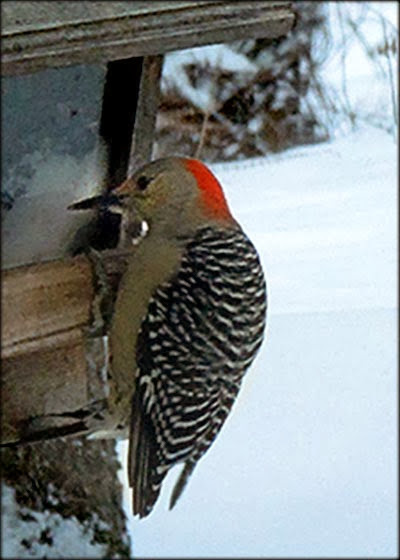 Posted by Ontario Wanderer at 8:47 am No comments:

A new batch of granola has just come out of the oven. I have been making some every other week or so for a couple of months. No two batches are exactly the same and I don't measure items too closely and sometime I don't have all the ingredients or, sometimes I have extra things that I think might be good to include. Anyway, if I remember correctly, this is what went in tonight. 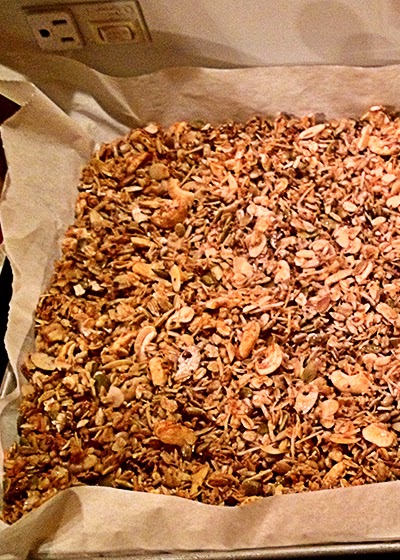 We eat our homemade granola with raisins and/or dried cranberries, Greek yogurt, and/or keifer and/or almond milk.

Posted by Ontario Wanderer at 8:04 pm No comments: 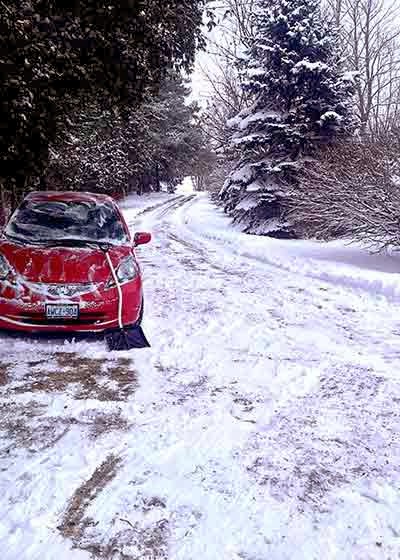 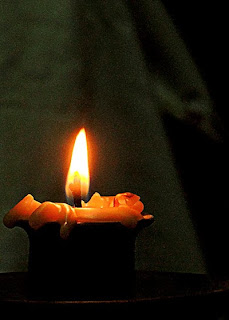 Posted by Ontario Wanderer at 9:27 am No comments:

Last Sunday was the deadline for putting art in the You Me Gallery in Hamilton so, of course, I waited until almost too late to create my last mobiles. I made two for the show but the one that I literally dreamed up last week took a lot more time than I expected to make. I made five wire figures to hang in acrobatic styles on my mobile frame. I also used a "ladder" that I had made for another work  last year. The hardest part of the project was bending a wire figure to climb the ladder. Oh yes, each figure is made from a single piece of bent wire which I do from a coil of wire on my workbench. It is only when the figure is almost finished that I cut it off the coil and I always leave a bit extra wire on the figure, just in case. In the case of the ladder climber, it just would not quite fit on the ladder and at the point where I  thought I had it correct, I cut off the extra wire only to find that I made the cut in the wrong place. I ended up with the "foot" on the ladder and the body on the floor. Had to start over on the hardest piece to bend.

Having finished the piece, I put it in a bag to transport to Hamilton. When I got there I found that the threads and wires and gotten all mixed up and it took quite a while to get it unsorted and rehung. Hard to believe that I make so much work for myself at times. Then there was the process of trying to make a photo of the work. It seems to be very difficult to make photos of mobiles. I took several photos and then did a lot of Photoshop work to try to make it stand out from the background. I had to take the photo outside as the mobile was too long to hang easily inside. As I said, I do make things difficult for myself.

Below is the photo I worked on of the entire piece as well as some closeups of some of the figures. 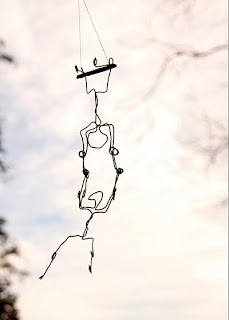 These figures are loose on the bar and from each other held together by friction and position. 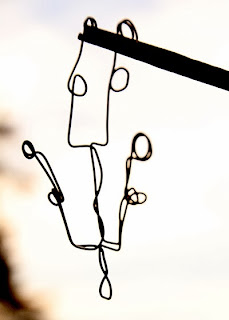 This figure hangs from the bar by one "toe." That is by the end of the wire which is sharp. 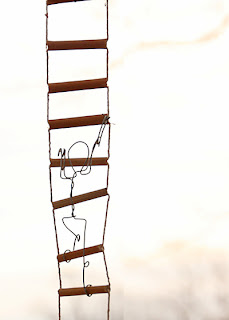 I did have to use thread to secure one "hand" of this figure onto the ladder. It kept falling off and swinging by it's feet.

This mobile, and one other much less complicated one, are in the You Me Gallery in Hamilton, Ontario and both are for sale. I am asking $76.54 for this one and I called it Dreamtime #5.

Why are there so few hours in the day. Always more to do than time allows. Missed two workouts last week due to other events getting in the way. Writing has suffered. Thinking has suffered. Maybe next week will be better.

Meanwhile, we have been having some nice sunsets. 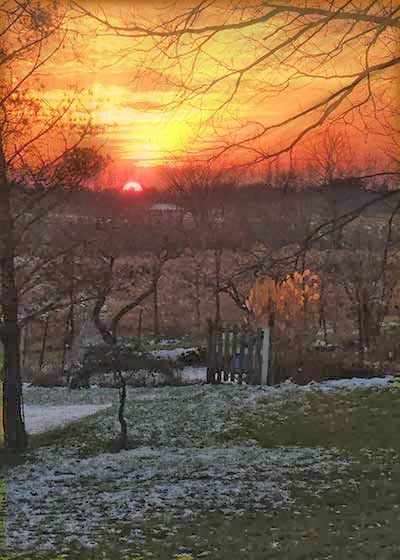 My Friday flower count continues to go down. I only found 11 wild flower species last Friday. The fact that the temperature dropped to -10 C on Thursday and never got above freezing on Friday had a lot to do with the small count.