Some of the colours of October are disappearing with all the rain and high winds of this past weekend. 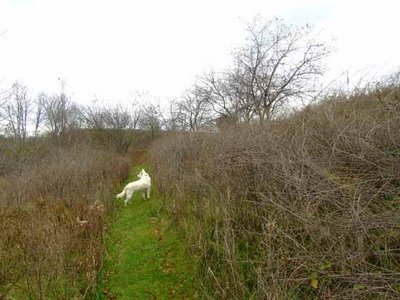 We do have some colour in the barn where our gourds are drying. 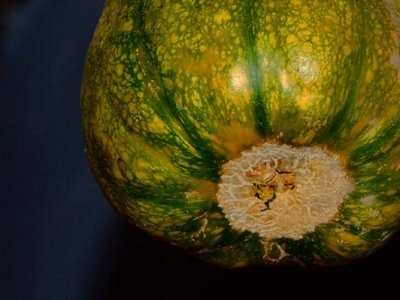 And then there are sunset colours. 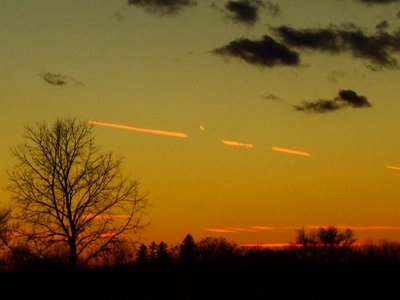 I found six larvae in a section of limb that I was splitting today. The limb was about 20 cm (8 inches) in diameter and damp in the middle where the larvae were found. The largest larva was about 2.5 cm (1 inch) long. It fell out of the limb as I split the limb down the middle with my axe. 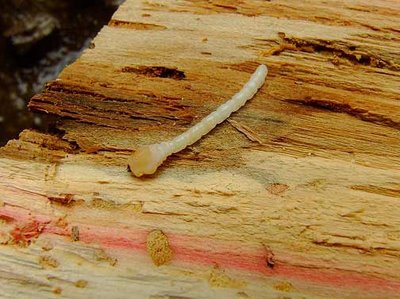 While I was photographing it, I saw three more, much smaller larvae in the wood and brought them to the surface with a splinter. Initially they were curled up in what I assume were defensive positions. After a few minutes they started to uncurl. 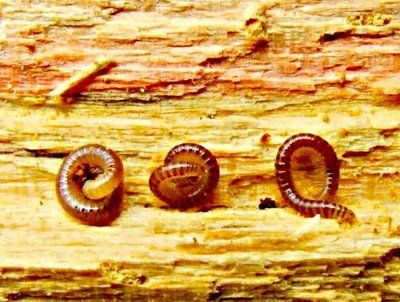 After they uncurled, they appeared to be about 1 cm (0.4 inches) long. 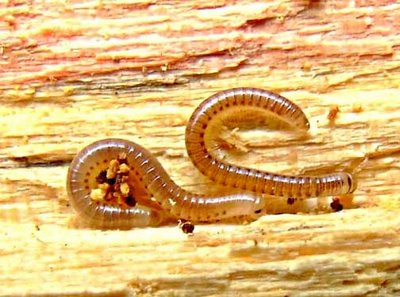 I also saw two much smaller larvae that I was unsucessful in photographing as they were too small to make much of an impression in the camera.

So my question is, what do you think they are. After some thought, I am leaning towards identifying the three small larvae as centipedes due to the way they were moving and I think I can see many, many, very small, almost transparent legs on their bodies but the larger larva has me quite puzzled. Any ideas?
Posted by Ontario Wanderer at 4:58 pm 4 comments: 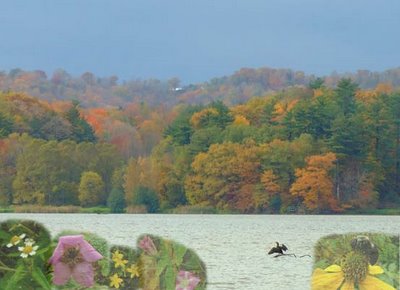 On my October 20th personal wild flower search, I found 61 species in bloom. On one hand, that is amazing for this late in the year. On the other, since I have been out almost everyday someplace looking for flowers and have been helped by groups that I've led at least once each fall in late October for over 20 years, I do know where to look and have a good idea about what flowers will bloom this late. It also helps that the temperatures are warmer than they used to be.

The trees on our home property have mostly lost their leaves and it looks more like November than October here, but down by Lake Ontario, Hamilton Harbour and Cootes Paradise where the waters keep the land even warmer, the tree colours and wild flower blooms have held on later. Oh, the bird in the photo holding its wings out to dry is a cormorant. They are very common these days on the edge of Lake Ontario.
Posted by Ontario Wanderer at 10:10 am 5 comments:

Can you believe that I am still waiting for my main computer from a shop that prides itself on a two day, or less, return? Today is day 15. Sigh!

Meanwhile, out in the nearby fields . . . 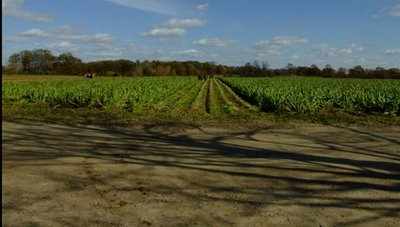 Here is a closer look at some horseradish plants. 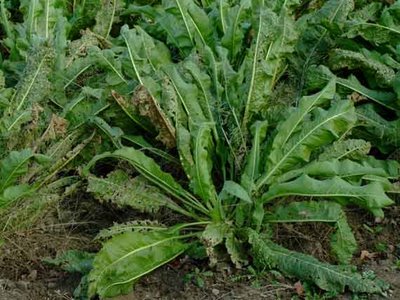 The first step in harvesting this root crop is to get rid of the tops. The tops are cut, shredded, and blown back onto the field. 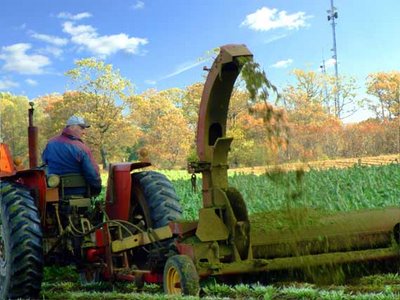 Next, this large machine is pulled by another tractor over the rows. The roots are dug up, dirt shaken off, and then two individuals are doing something to the roots as the machine moves the roots to them. Maybe they are sorting? I really don't know. 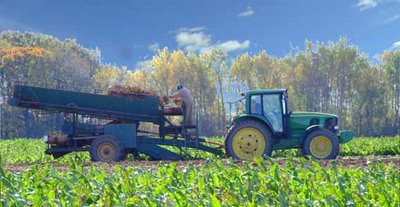 They are then loaded into a truck or trailer and moved on to some unknown location. I think I need to follow both the soybeans and horseradish roots further along to see what happens next.
Posted by Ontario Wanderer at 8:53 am 8 comments: 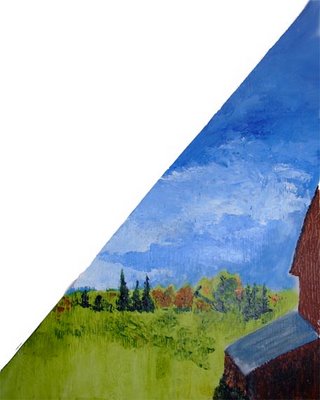 This is the painting that I talked about last week. Tomorrow is painting class again. Wonder what this week will bring?
Posted by Ontario Wanderer at 8:33 pm 3 comments: 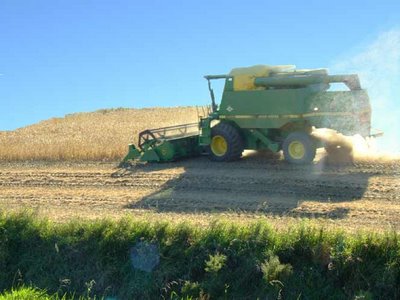 Side view of the combine. 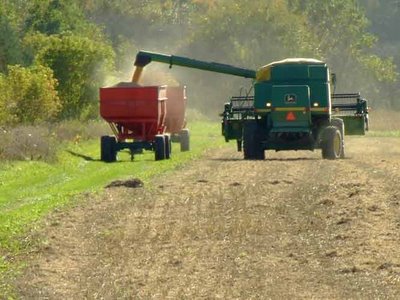 Moving the beans from the combine to a trailer. 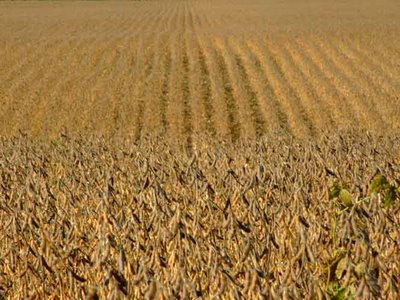 View of a soybean field 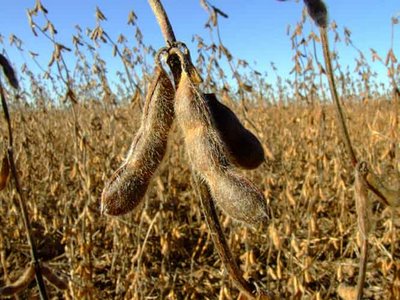 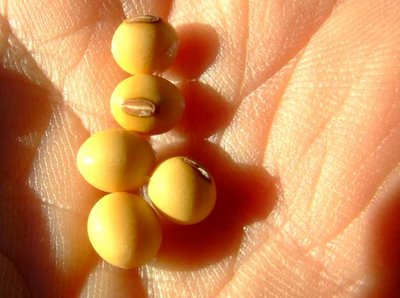 Soybeans in hand
Posted by Ontario Wanderer at 8:22 pm 6 comments: 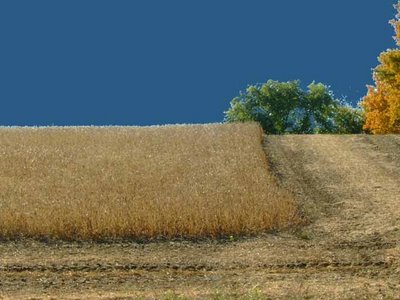 The combine has been around the small field twice. I am waiting for it to come by again. 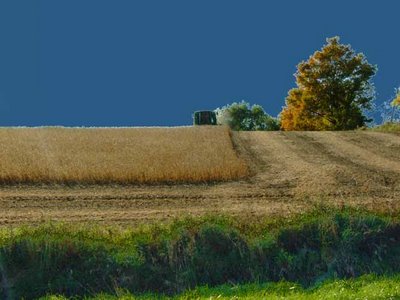 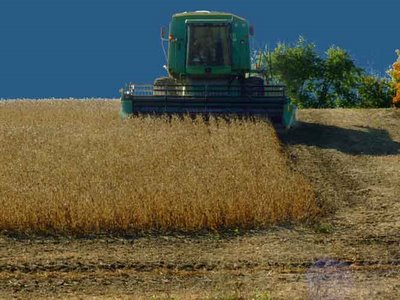 Yes,I had to make some adjustments to the sky colour to compensate for the camera's automatic metering. The camera would not show sky and soy and combine in the same kind of light by itself. 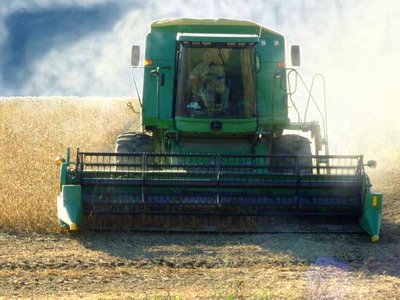 It would be a very dusty job without a cab on the combine. 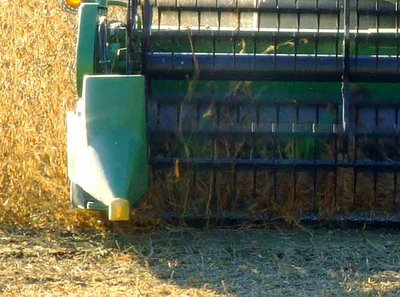 Telephoto is better than being there.
Posted by Ontario Wanderer at 5:45 am 2 comments:

The article below, copied from the website following, is an Ontario soybean report:

Harvest progress has been slow the past two weeks. Yields reported to date have been average to excellent, but it is too early too provide any provincial estimates.
Soybeans harvested at higher moisture levels than desired for storage, can be dried in several types of high or low temperature driers or with aeration, but care must be exercised. The high oil content of soybeans makes them more susceptible to spoilage than corn.

Soybeans are fragile and can be easily damaged by air that is too hot or too dry, but also by rough handling.

The relative humidity of the drying air must be kept above 40% to prevent seed coats from splitting. The maximum drying temperature for drying soybeans is 55 – 60°C (130 -140°F). Seed soybeans should be dried at temperatures below 40°C (104°F). Ask your seed company what method of conditioning of tough seed beans it prefers. Monitor split seed coats during drying to gauge the drying effect. Avoid dryers that stir the grain or recirculate to minimize seed damage. Soybeans have about 25% less airflow resistance than shelled corn, so fans sized for corn drying will produce greater airflow through beans resulting in faster drying. Beans can also be dried with natural air under good drying conditions. Do not run the fan continuously, since soybeans both give up and take on moisture easily. The fan should only be run when the outside conditions will result in drying progress. If conditions are wet, supplemental heat may be required. Heating the air lowers the relative humidity. Heating air by 6.7°C (12°F), reduces its relative humidity by ½ as a rule. To remove moisture, the minimum airflow required is 3/4 cfm/bu. An accurate moisture tester and method of measuring relative humidity is essential to monitor drying. For further information consult the website OMAFRA Agronomy Guide.

I saw the first soybean combine in our area yesterday, Friday, October 6.

(In addition to my desk computer still being in the shop, now Blogger is not loading my photos. Sigh! I will put the photos on my Flickr site for now and try later to get them on this blog.)
Posted by Ontario Wanderer at 10:26 am 1 comment: 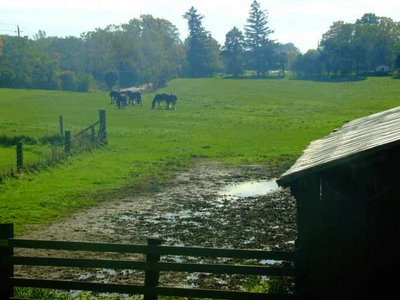 On Tuesday this week, I started a landscape painting class. This was the side of the farm where I started my first painting. I left out the horses, added a bit more of the barn, caught a bit more of the colour in the trees, put in a lot of sky, and painted on a triangular piece of recycled wood that I had found in our barn and prepared before I went to class. I'll try to get a photo of my painting up in the next day or two. (No, my computer is still not fixed and still in the shop and I don't have access to . . . lots of stuff I think I need.)
Posted by Ontario Wanderer at 7:14 pm 3 comments:

So far it's not been the best computer day I've had. Maybe the worst? It appears that my computer is not alive this morning. It will not start. It gives a brief buzz and then quits. So, for now, the photos I had ready for the blog this morning are not available. I am also without my usual software and all my summer photos as I was very far behind in backups. I do hope that they are not all lost. (This is being written on Églantine's laptop computer.)

The race? Yesterday, I participated in a 25 km (15 mile +) trail run through the damp hills and valleys of Pinehurst Conservation Area near Paris, Ontario. I had a map and a bit of speed information on the other computer but . . . . Anyway, I finished the race on my feet, without any falls or physical damage other than what one normally gets from long distance running. I was almost twice as slow as the race winners. The course was two laps of a 12.5 km circle and I heard the winner come in to the finish about a minutes after I passed it the first time. There were many water, food, and aid stations around the course and we had a fine meal with music after the race in a huge tent. Have a look at http://www.runforthetoad.com/map.html for the map and then you can bounce about the links for any other information that you want. Meanwhile, I am going to poke around on my old computer to see if I can get it started on my own. (It worked fine last night!)
Posted by Ontario Wanderer at 5:50 am 4 comments: