(All measurments were approximate; I am seldom exact but most foods are eaten.)


Posted by Ontario Wanderer at 9:22 am No comments: 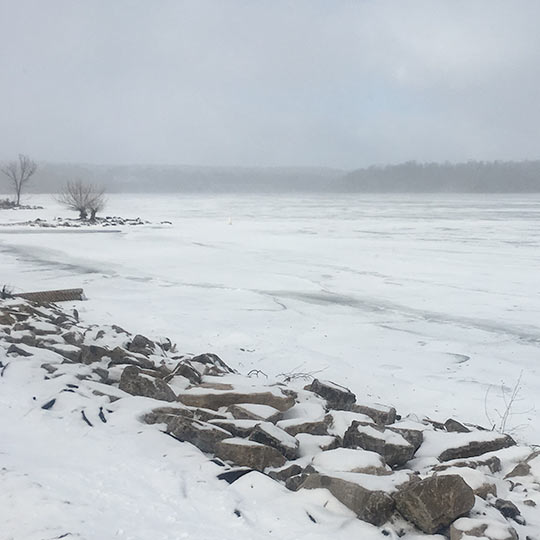 Hamilton Harbour was frozen as far as I could see.
This is the shallower west end by the Waterfront Trail.
(I was walking a 6 k and checking to see if any flowers
were still in bloom this year. None were.) 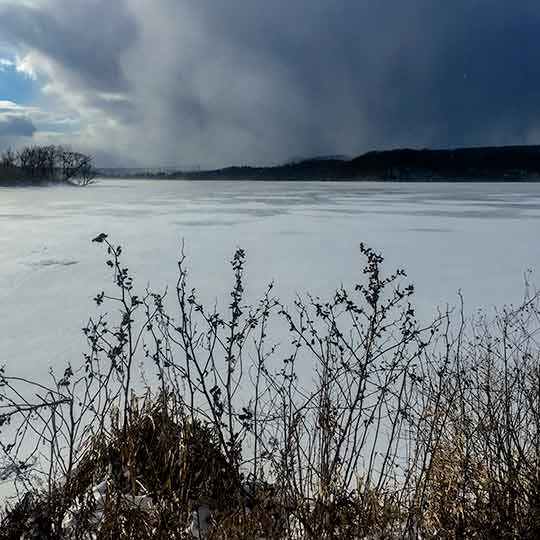 This is from the Cootes Paradise side of the Waterfront Trail.
Small snow squalls and snow whirlwinds were going
across the ice. Notices said the ice was not safe
for skating yet. Meanwhile, I did see kids out on the ice
last week. (If they fell through they would only
be up to their knees in water for the most part.)

Posted by Ontario Wanderer at 3:32 pm No comments: 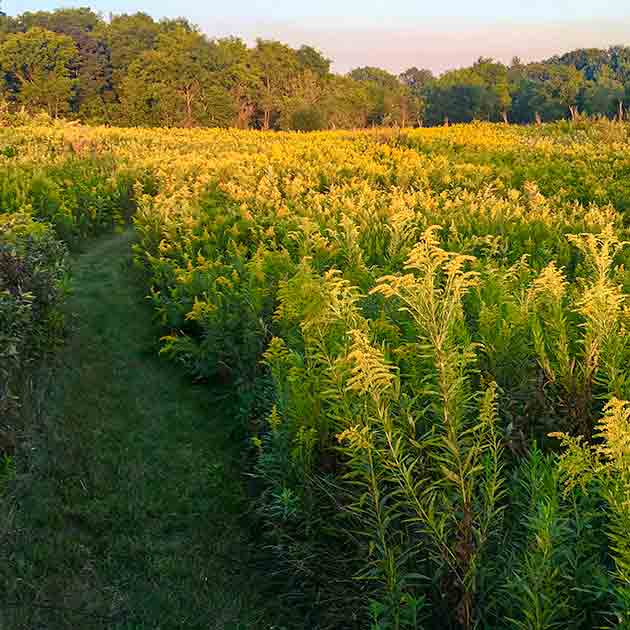 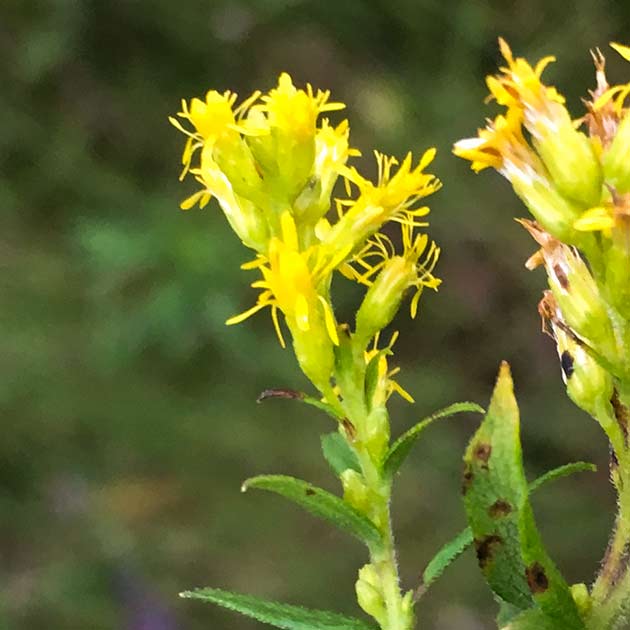 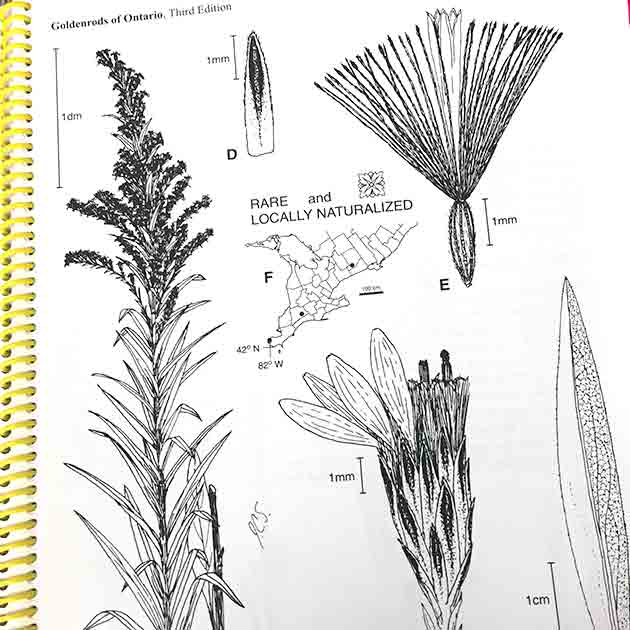 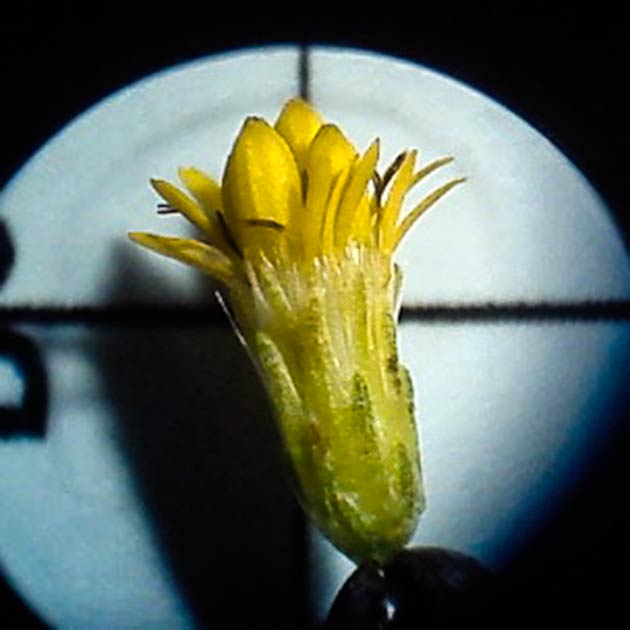 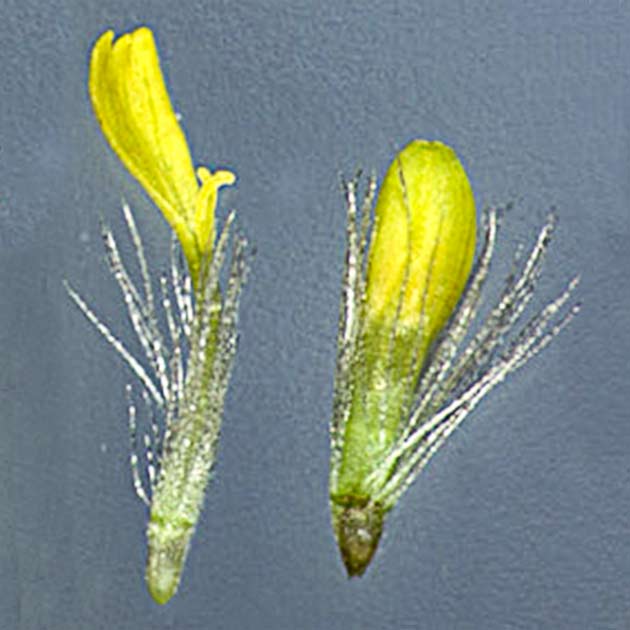 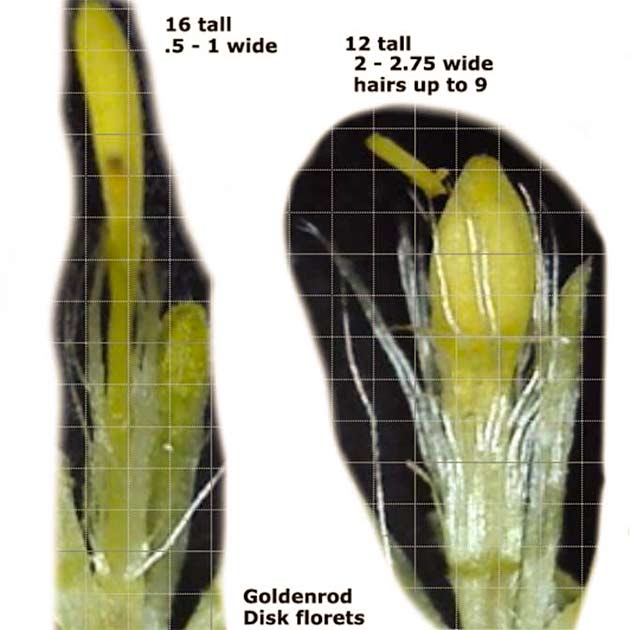 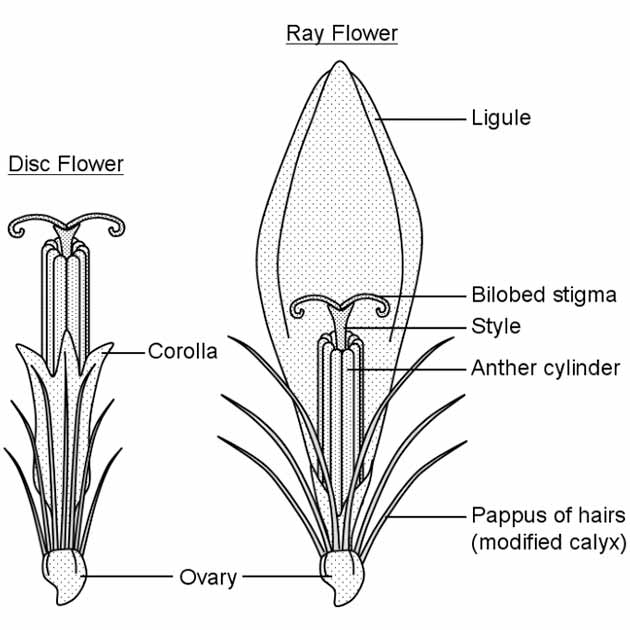 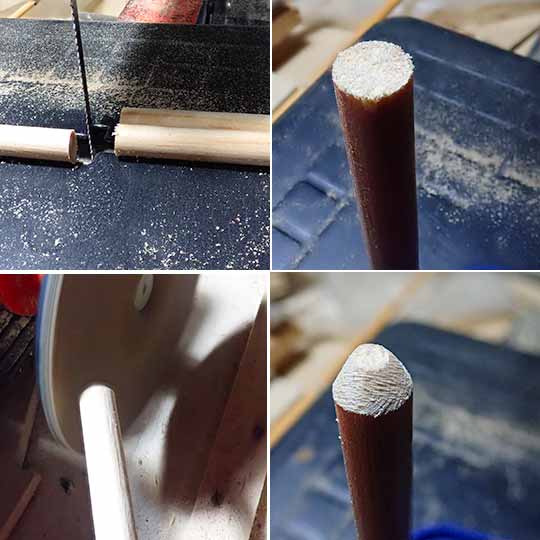 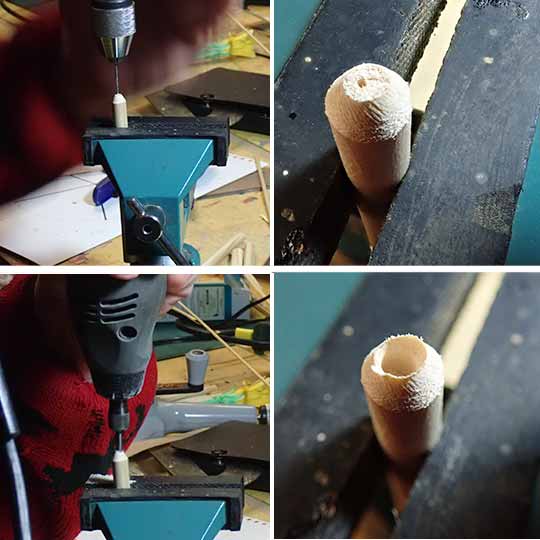 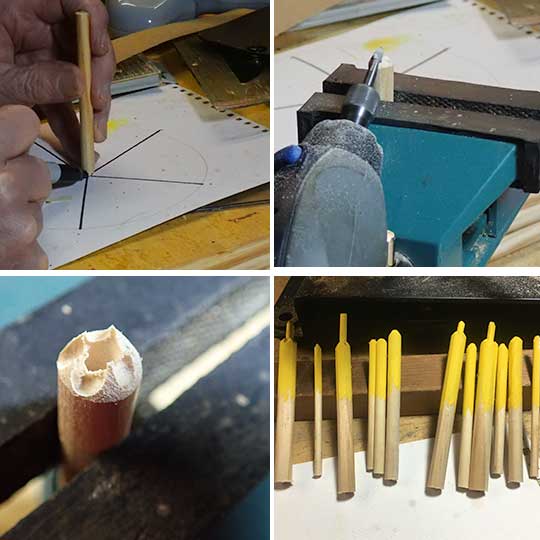 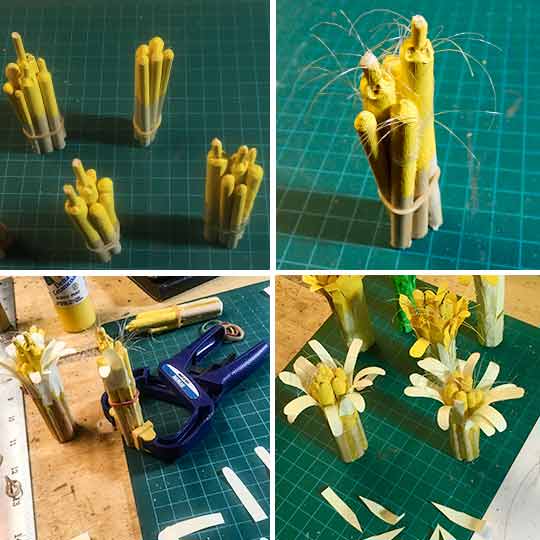 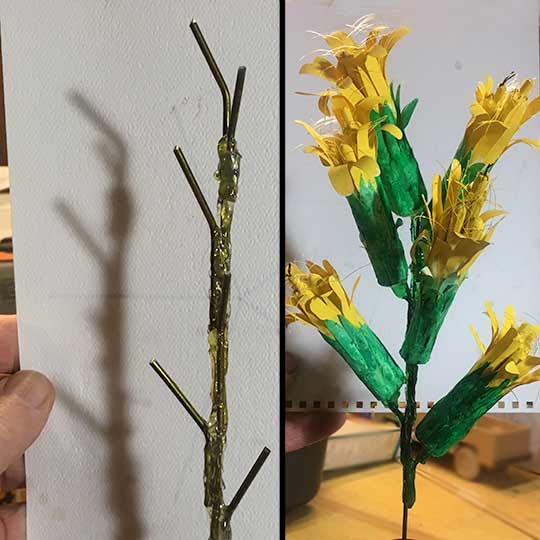 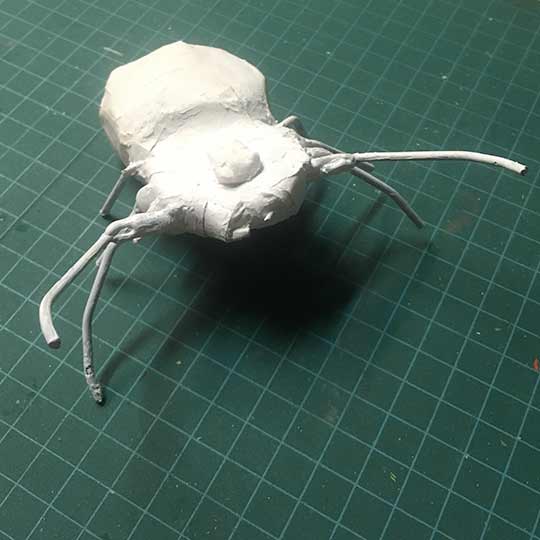 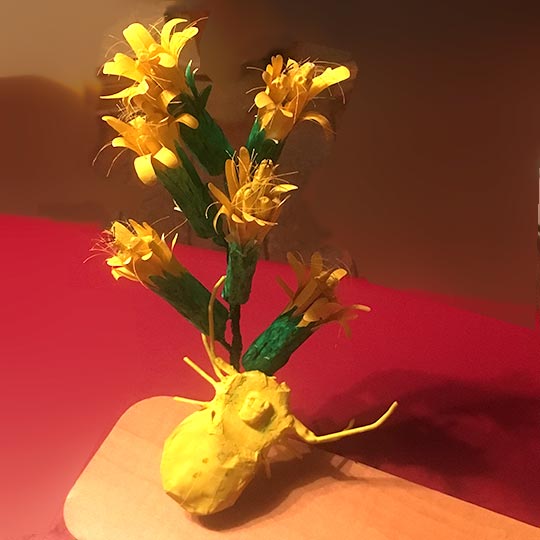 Posted by Ontario Wanderer at 8:22 pm No comments:

I have just updated my Wild Flower Web Page:

While I was out looking for wild flowers on Friday, I stopped to take a video of the ice at the edge of the Hamilton Harbour. I was enjoying the sound of the ice bits hitting together. The video does not do the sight or sound justice but does give a bit of an idea:

Posted by Ontario Wanderer at 7:44 pm No comments:

Of the 6 plants that I found blooming in the Hamilton, Ontario area yesterday, all 6 were alien to North America. That is not too surprising as of the 44 plants that I have found in January's past all but 4 were alien. The 4 that were found in other years were all hold overs from warm October, November, and December months.

The only plants that start blooming in January are cultivated Witch Hazel that come from Asia, I think. The one Witch Hazel that I found in bloom yesterday did start blooming in December so it too is a bit of a hold over from last year. That being said, there were two of the imports that were starting to show petals so they may be blooming sometime soon or they may just wait for different weather. I have seen petals start to break from bud and then wait for weeks before actually coming all the way out in years past.

The two plants with flowers that I photographed yesterday have been found in years past during every month of the year during one year or another. They are hardy indeed and both I have found blooming under the snow when I have cleared out places where I knew they grew. 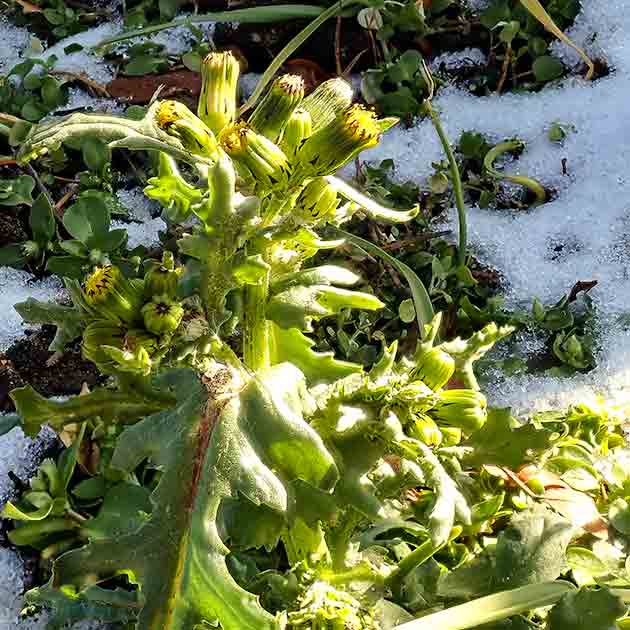 According to Timothy Coffey's "The History and Folklore of North American Wildflowers," the name Groundsel comes from "the Anglo-Saxon groundeswelge, meaning literally, 'ground swallower,' referring to the rapid way the weed spreads." As one can see it is a composite flower that produces many, many seeds from each flower head that is made up of many florets. 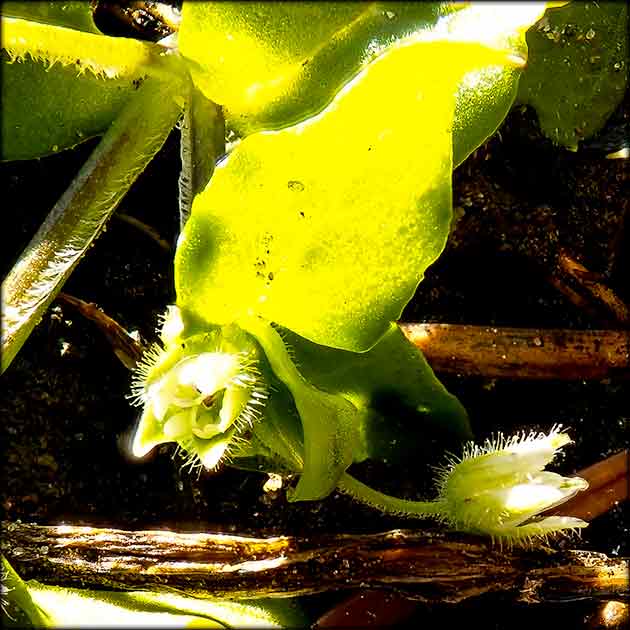 According to books I have read, Chickweed was native to Europe but has travelled and grown everywhere Europeans have gone in the world and now lives on every continent including Antarctica and up north of the Arctic Circle. The book "Weeds of Canada" states that 1 Chickweed seed could produce 15 billion offspring in one year. The good news is that one can eat the leaves and feed your chickens on the seeds.

The other plants that I found in bloom yesterday are listed below:

Posted by Ontario Wanderer at 3:06 pm No comments:

I joined Fleur-Ange, and other Beckett walkers, on a walk from Hardy Road to the pedestrian bridge over the Grand River and then along an old rail trail today. The way the Beckett walkers handle their Thursday hikes is to choose a place and walk one way for 45 minutes then turn and walk back. That way almost everyone should finishe at the same time, no matter how fast or slow they walk. Neat system I think. That being said, some do not do the whole 45 minutes out, so they finish early. Fleur-Ange and I aim to do the entire  90 minutes so we are usually the last back.

Below is a photo from about 40 minutes into the walk. There were at least 20 walkers when we started. How many can you see on the trail? 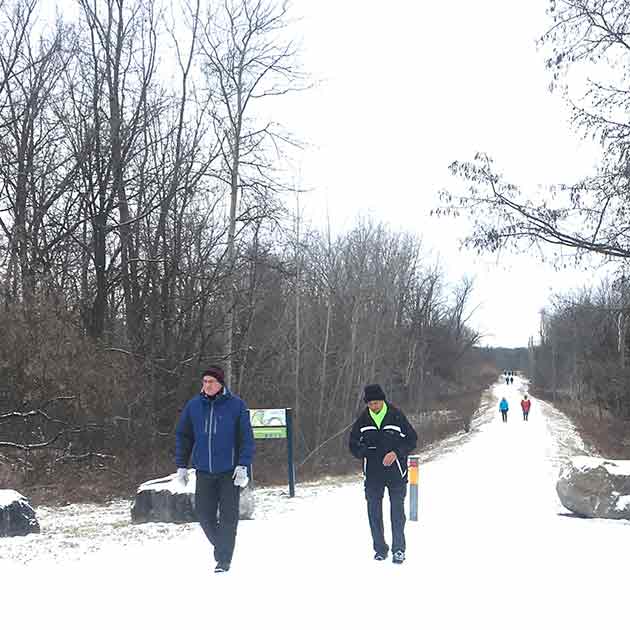 Posted by Ontario Wanderer at 8:20 pm No comments:

On mornings when I have enough time, i.e. not rushing off for some activity or another, the dog and I have a nice 2.5 km walk on some of the trails on our property. It has some bush, some open meadows and small hills to go up and down. Below is a map of a typical morning meander. 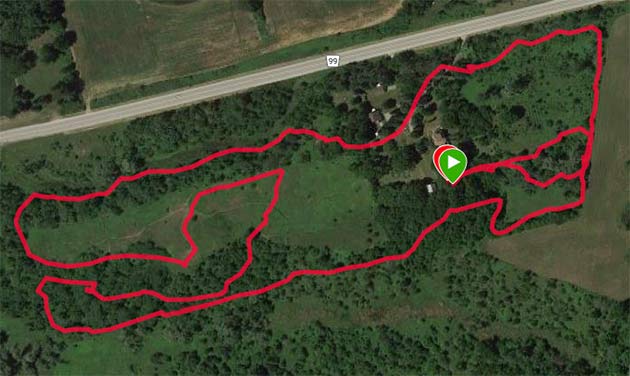 The "hills" are really the edges of two ravines that are on the north and south sides of the property.

On the east (right) side of the property is a small shallow "pond" that is often dry in summer and fall but usually has water in late fall, through the winter and spring. I started taking almost daily photos there in 2012 and have been photographing it from the same place every morning that the dog and I make it out. Following is one of the first photos and and one of the last: 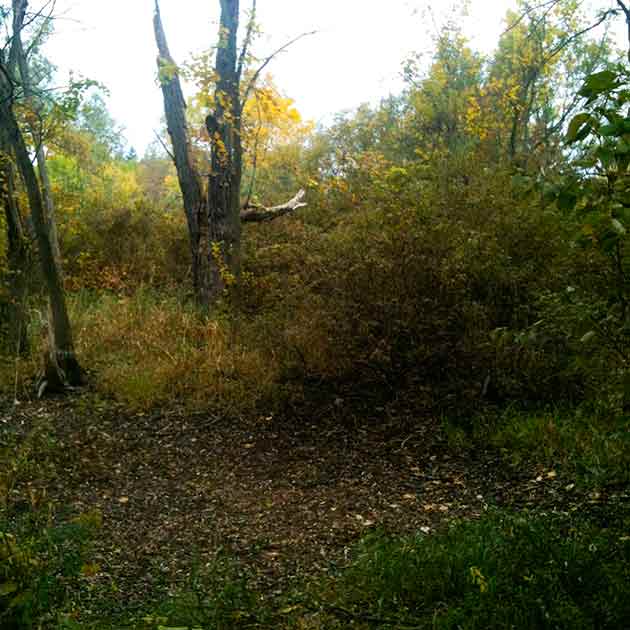 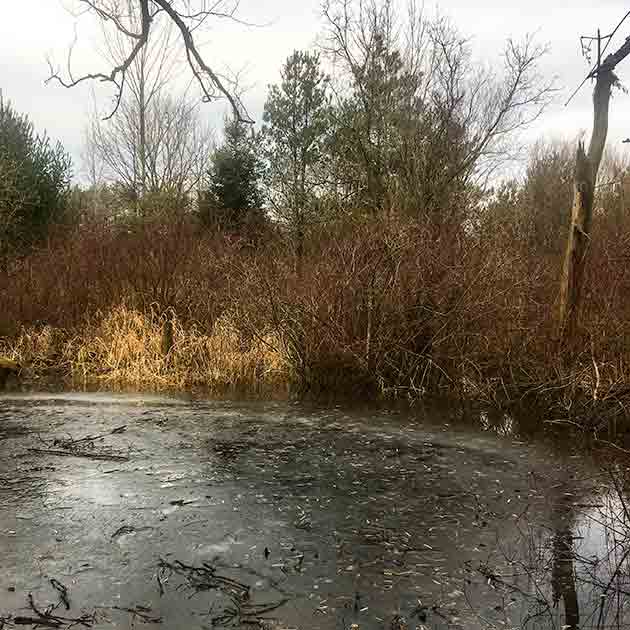 Another photo from January 1st is of a Highbush Cranberry that is located in the west meadow. 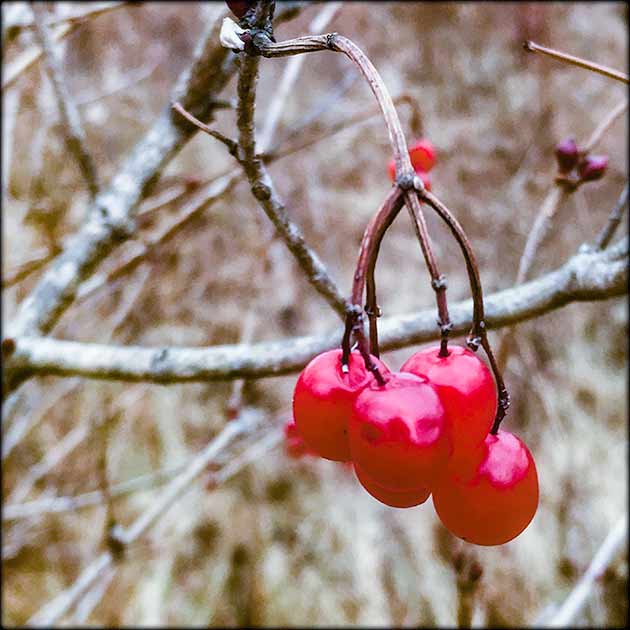 Posted by Ontario Wanderer at 7:35 pm No comments: