Plans changed today thanks to Frederic. He told us about a bike path that went to our next stop point. So we started on the opposite side of the river from the rout i had planned. At first it was on a fairly busy road and we wondered if we had made an error, but Fleur-Ange saw a side road that connected to the canal and we were off on a much more pleasant waterside walk. 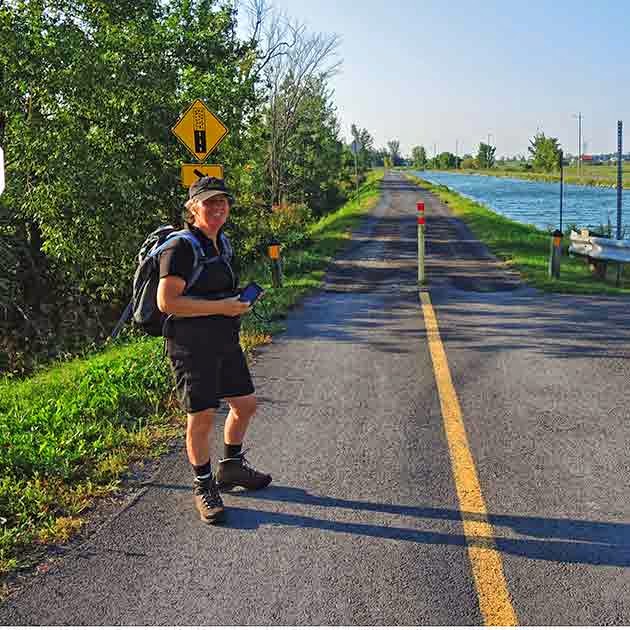 At this point i started back to town to do the car shuttle. I took the canal path back instead of the road to see where we had gone wrong. It turned out that we had not gone wrong at all as i had to do dome rock climbing and weed walking to get back to the road.

I worried about finding Fleur-Ange and Pauline as the canal path was not visible from the road but then the road turned and crossed the canal. Just as I was crossing the canal, Fleur-Ange & Pauline were a few metres down the trail. I moved on down the road to find a parking spot and returned down the trail to meet them. At this point the canal was quiet and not very close to the road. Also, at that point there was a lift bridge with a story. 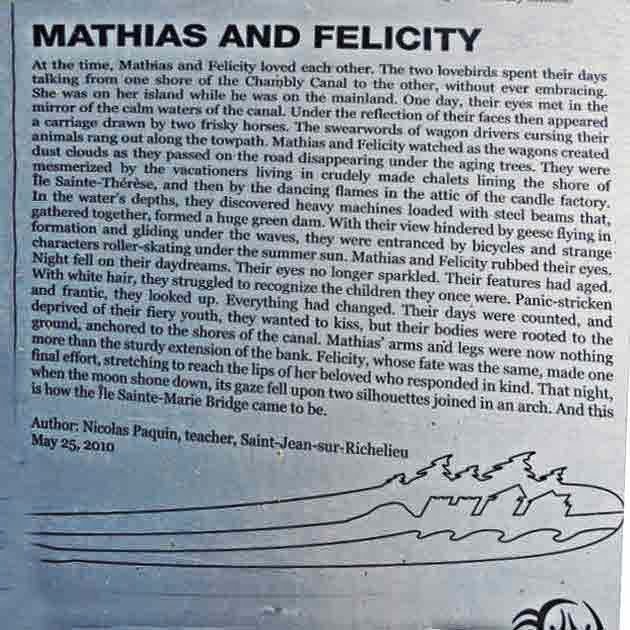 After meeting Fleur-Ange & Pauline, I walked back with them and then further on the trail..Just past the lift bridge the trail joined a road. Along that road were some of the most expensive houses that we have seen so far. When I turned after a couple more kilometres, I was treated to the view of one of the more exotic cars that I have seen. It was a little, fire red Lotus convertible! I know it was very expensive as the poor man did not have enough money left to repair his muffler. Sorry, I did not get a photo..it appeared and disappeared to quickly for me to get out my camera.

The trail and road were side by side for quite a while so I thought I would see Fleur-Ange & Pauline as I went by. I missed them. They were shopping for material and fruit in some little stores just before the trail moved into a stretch between the river and the canal. Fleur-Ange and I made contact via iPhone messages so I did find out where they were so I drove ahead to look for a trail access point. I did not know when I could get to the trail as the road was on the other side of the canal. Of course there was road work ahead and the road was closed. Soon I was on a detour with no clear idea whew the trail was or where I was for that matter. Thank goodness for Google maps. I did find the road and trail after some wandering about and did find some canal locks with a pedestrian bridge across. I was 5 km ahead at this point as the trail only had access to dry land at the bridge and the locks for those 5 km. I walked back until I met Fleur-Ange & Pauline. As we returned we saw a man swimming and fishing in the river. The water was both swift and deep so he was having a good time with his flippers, mask, and fish spear. He did have a good sizes fish on a line with him so it was not just fun but productive too.

The canal bike/walk trail finished just beyond the locks so the rest of the day was on city streets in Saint-Jean sur Richelieu. I thought I would give Fleur-Ange & Pauline a break and stop early but they didn't' want to stop. (The canal trail made the walk 2 km longer than the road walk in the original plan.) that being the case I drove to the end and walked back to meet them and we finished together. Pauline's Garmin recorded 22 km. with all of my shuttling and walking back and forth in only walked 19.4 km today.

Oh, just for the record, we started our day with homemade granola. I had two of my granola bars, an apple, and a peach for lunch and we all went to a restaurant for a pizza supper. No, I did not avoid glutenin today.


Posted by Ontario Wanderer at 6:28 am