Sorry I missed posting yesterday. Hope the edge of the chairs did not bite too much.

The air temperature has gone up a lot in the last two days. It's almost balmy. 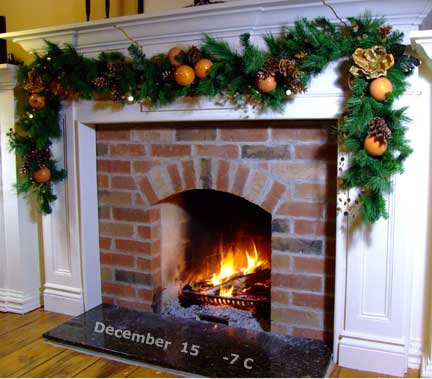 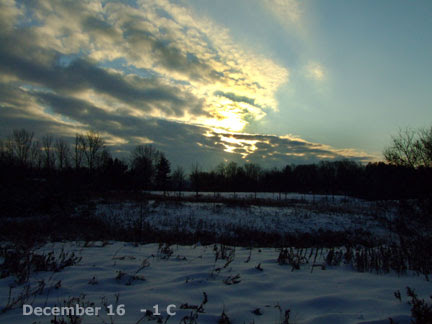 I was anxious, frightened and a bit exhilarated when balanced on top of large canoe packs while riding an overloaded canoe going through fast and rough rapids. We had decided to risk the overloading after spending time lining the two remaining canoes down river for a half hour or so and making very little progress. We did make it to the end of the rapids and, much to my surprise and gratefulness, we found the missing canoe drifting slowly in large circles around an enormous eddy at the end of the rapids. We grabbed onto it and pulled it slowly to the shore where we checked the damage and our remaining possessions. Luckily for us, we had had all the packs and our shoes tied securely to the canoe so all we lost were the paddles and kneeling pads that had been loose in the canoe and much of our pride at not having been able to handle the canoe in rough water. Needless to say, everything not secured in plastic bags was soaked. Again, fortunately, almost all of our clothing and food were in plastic. I found my 35 mm camera inside my newly purchased "waterproof bags" resting in a small puddle of water. I took a few photos and replaced the film. There was a bit of water damage to the photos, but the camera continues to function 24 years later. My partner had not bought the expensive waterproof bags but put her camera in a simple zip-lock freezer bag. It was perfectly dry! I have been buying zip-lock bags for many items since then. 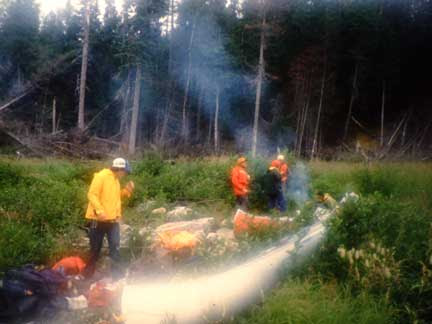 The next day was to be our last and it was but not in the way we expected it. There was a particularly bad set of rapids just ahead of where we had camped but we could not line the canoes on our side of the river so we had to cross the river to do the lining. My partner and I were not successful at getting across in time. Instead we had one of the wildest canoe rides that I ever want to take. The canoe was going through huge standing waves. There were times when I was looking up to see my partner high above me in the front of the canoe as we headed for sky and times when I was bracing to stop myself from falling down into the depths as she was far below me. All the time we were desperately hoping to miss all the rocks in the river. We were successful in that we made it through the roller-coaster ride and to the side of the river at the bottom of the rapids with the canoe about 3/4 full of water but we were still upright and nothing was lost or damaged.

Because of all the excitement and misadventure of rapids, we were being even more cautious at the next and last set of rapids when misfortune hit the final time. Our leader, while walking and hopping along the side of the river slipped on a mossy rock and went down hard. He put out his hand to help save himself and put a finger, on his dominate hand of course, out of joint and out of service. He pulled the finger and tried to get it back in place but was not successful. We put on a splint and again worked on our problem solving skills. We were fortunate in two ways this time. We had just passed the first road that we had seen on the 5-day journey so the plan seemed obvious. We were going to abandon the trip and walk out, no matter how long it took as travel. Without our leader being able to paddle, it would have been very difficult to finish on the river and we knew that we were only about 30 miles from our Goose Bay ending point. We took all of our packs out of the canoe and took them up to a clear spot by the "road" and I dug into my pack to get my tarp so I could keep items out of the sandy soil. I had just spread out my tarp, which was bright orange, when we heard a loud sound coming from above. We looked up to see a helicopter. It was the first sign of current civilization we had seen for the week. We all waved and jumped up and down and the helicopter actually landed. 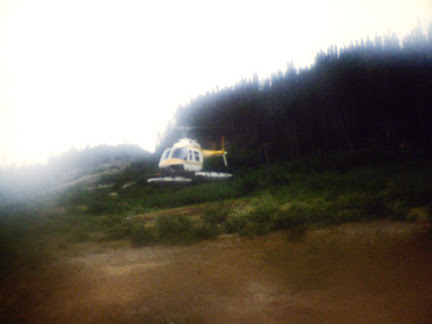 It turned out that the bright orange tarp was actually a signal of trouble. I had had no idea that it would be of help in that manner. Anyway, the helicopter pilot was taking two men into a fishing site somewhere further along but he agreed to stop on the way back and give our leader a quick trip into town by air which he did. Our leader was dropped off at the Goose Bay hospital and properly put back together. He did lose the flexibility of that finger and had to give up some of his guitar playing ability but that was the only lasting effect, as far as I know, of his accident. The rest of us camped where we were for the night and started to portage our canoes and belonging along the road the next morning. It was not long before we were met by our leader and another person who had brought the van as far as they could along the road. Unfortunately, the van was still several kilometres away from us but, after some thought, we all went back to the van and started some road repair. There were several gullies washed into the sandy roadbed, but we were able to fill those with rock and logs and sticks and got the van to the canoes to collect them without having to portage them a long distance. Thus ended the Churchill River expedition. It was not as expected but all survived with minimum damage and only a few items were lost. 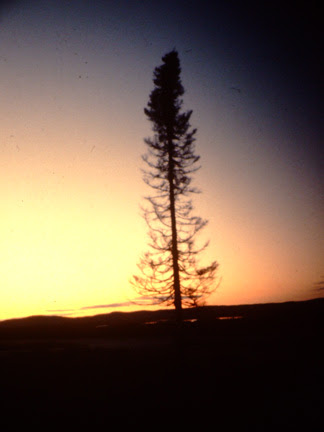 Posted by Ontario Wanderer at 12:15 pm

Oh, what an exciting trip and adventure you all had! Sounds like you were lucky that you made it as well as you did, and that canoe ride....Oh, I can't imagine! So lucky you didn't hit any rocks!!

I forgot to say that I love the fireplace! So pretty and festive and warm!!

That was a great, great story OW! Thank you for telling it. What an exciting way to end the trip (though it must have been pretty scary in parts).

Great story, OW! Such an adventure, the kind that makes for this good storytelling. I learned a lot too! Orange tarps and ziploc baggies. Two must-have items.

Thanks so much for taking us along. It seems we shared a sunrise Wednesday morning too. Really nice photo - looked like that here in upstate New York

R, Yes very lucky but the water was up about 3 feet above normal so we had some extra water above most of the rocks.

Our fireplace is burning almost every morning these days as we have our mourning coffee after breakfast in front of it while we read a bit.

SGJ, Glad you liked the story. Yes parts were frightening then, but it makes a good story now.

RD, There must be easier ways to learn about Ziplock baggies. I think you found the best way.

CB, Glad you stopped by to read. I guess you are a sunrise person too.

Thanks for sharing your story and your pictures, OW. It was fun to keep coming back day after day to get the next chapter in.