I recently joined a reading Blog group called Whorled Leaves. The group has chosen the book The Lonely Land by Sigurd Olson as a first book to read and share comments about. It was a shot in the dark for me as I had never heard of Olson or his book. I collected the book from the library last night and had a quick look through and read the introduction. It is a book about a wilderness canoe trip down the Churchill River in Saskatchewan. I felt an immediate kinship to Olson as I did a wilderness canoe trip on a different Churchill River. The Churchill River that I paddled down was in Labrador and even though it was at least 20 years after Olson's trip I already expect that some of our experiences will be similar which will make the book of even greater interest to me.

Since I am going to be reading about a wilderness canoe trip, I thought I would share a few memories about my trip here on this blog. The memories will be hazy at times as the trip was in the summer of 1981 and I can find no notes but I do have old slides that I took during the trip. As long as my slide projector holds out, I hope to make digital copies of some of the photos that I took back then. (If I blow the projector bulb, I may be finished. I am not sure that the bulbs are available anymore.)

I had a friend in Labrador that set up the trip and asked me to come along as one of six participants. After a few minutes of thought, I said yes and started preparations. First was a bit of map work. Where is the Churchill River anyway? 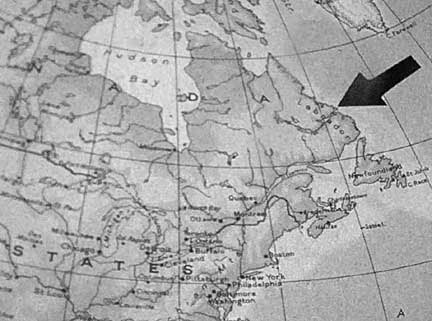 Well, actually, where is Labrador for starters. If your geography is not quite up to what it used to be, look for Labrador on the east coast of Canada. It's officially part of Newfoundland although Quebec would like to lay claim to it. 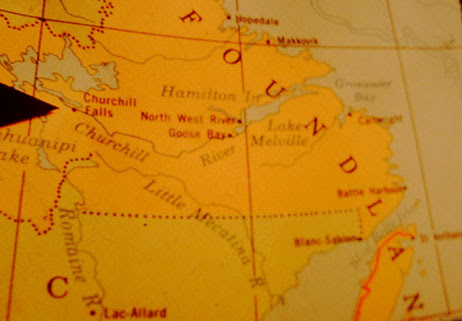 The plan was for me to fly to Goose Bay, Labrador and join the group there and then we would load three canoes and all or our gear into a van and drive on the only road in Labrador, yes, the only road, to Churchill Falls. We had to take extra gas just in case as there were no towns, no service stations, and damn little else other than bush along the road. It really was the only road in Labrador other than a short one between Goose Bay and North West River. All of the other villages in Labrador were along the coast and accessible only by boat.

Below was my first sight of the river near Churchill Falls. Yes, it is a canyon at the beginning. No there are not many places to get off the river. No, there are no towns, villages, or houses between Churchill Falls and Goose Bay. No, the road is not close to the river. No, once we leave the van there is no easy way to turn back. Yes, we need to be careful. No, there were no GPS units then and we did not have two-way radios. We would be out of communication with the rest of the world for the time it took to get down the river. (To be continued.) 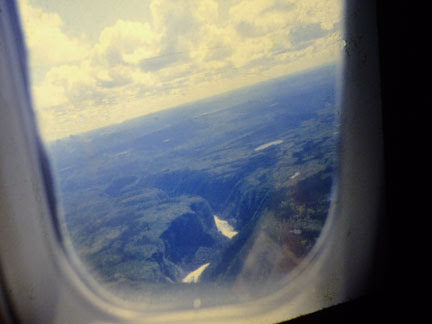 Posted by Ontario Wanderer at 4:35 pm

I LOVE IT! I came in late this evening and saw your post on whorled leaves. It delighted me that you're digging right in. I had no idea we'd get the full scoop of another journey, as well. Your comment about the projector bulb blowing really cracked me up. The gorge looks gorgeous. I can't wait to hear more about the adventures of OW and see some of the photographs. Wow!

L, Don't laugh about my projector bulb. If it goes I am going to have to find a new way to digitize my slides and I am sure it will be expensive. (So far, so good...)

I'm looking forward to the next installment of this. I love adventures.

I love this story! I am also looking forward to the adventure. I hope telling it is like reliving something fantastic.

SGJ, I love reading your blog. You have adventures where the rest of us would only be having a nice walk.

RD, Thanks. Yes, I am enjoying reliving the adventure as I look at the photos and drag back memories.