We've had three days of cloud, fog, rain off and on, wind most of the time, and generally not too pleasant to be outside. 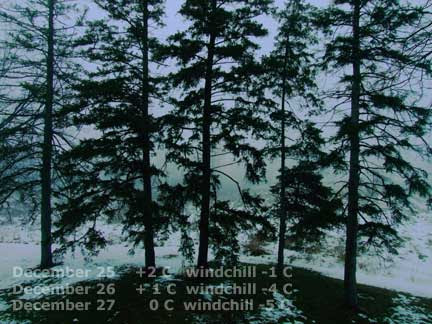 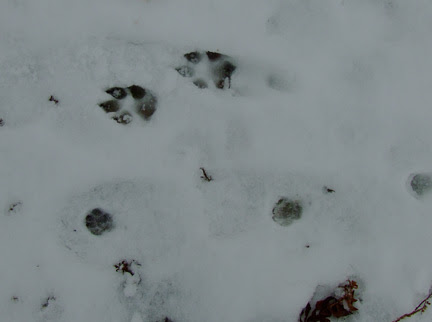 Notice the difference in size amoung the six sets of tracks. OK, there may be more than six sets, but that's all I can see in the photo. Calla's footprints are the freshest. She, like everyone else, has gone from right to left in the photo. Her dog prints are in the upper part of the photo and show her claws a bit.You can see the prints of one front paw and one back paw. Sorry, I still can't tell front from back yet. Anyway, the second freshest set of tracks are of those of the red fox. They are the smaller tracks near the bottom of the photo. The red fox, when walking, tends to put its back paws in the tracks of the front paws so there is one imprint with the hind foot going over top of the front footprint. Under Calla's tracks you can see one track that I made the day before. We had a bit of snow overnight to partially cover that track. Under the fox's tracks, you can see one print from Églantine also from the previous day. Between the prints of Églantine and I, you can see faint traces of Calla and the fox also from the day before.

Below is a close up of the fox tracks. 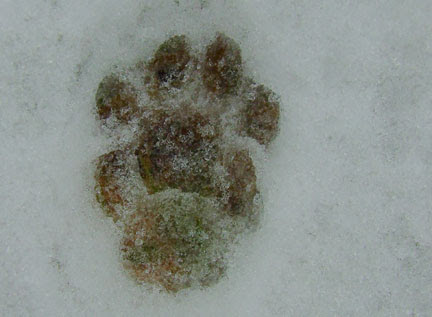 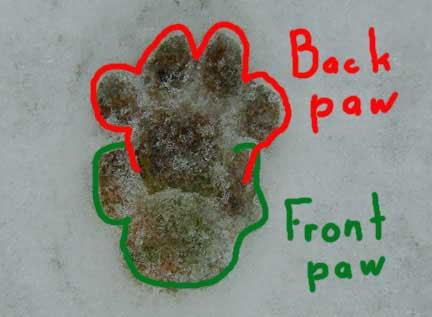 (Yes, it was difficult to get that paint powder on the snow, and to print so small, and still be somewhat neat.)
Posted by Ontario Wanderer at 4:33 pm

OW, that is such an excellent way of showing the rear paw fitting and overlapping the front pawprint. So well done. I can really see it. Thank you for taking the time.

We had some sun today, so we went for a much-needed walk. It was good to be out. Hope you get some sun there.

Such an interesting picture! Thank you for giving that tracking info! It's always fun to learn new things. That is amazing!

Excellent and very interesting, as always!

I've been wanting it to snow ever since we moved here, just so I can go out and find tracks! So far no luck though.

RD, Glad the sketch worked for you.

R, No snow? Must be awful! It certainly feels that way here now.