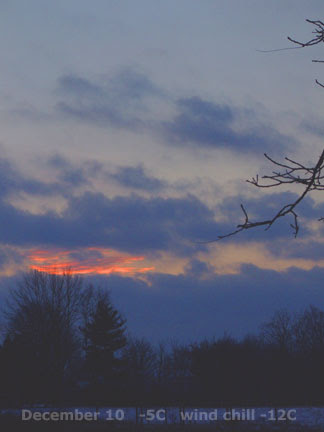 There were no major adventures, that I remember, on the second day of our trip. We did have some rapids to play with but since all but one of the group were new to white water canoeing and since it was early in the trip, we chose to line them. That is, we got out of the canoes and held on to ropes that were attached to the bow and stern and floated the canoes along the edge of the river while we hopped along the rocks and water at the side. That got up past the rapids slowly but fairly safely. The only problem with this method, other than slippery rocks, was the flies. 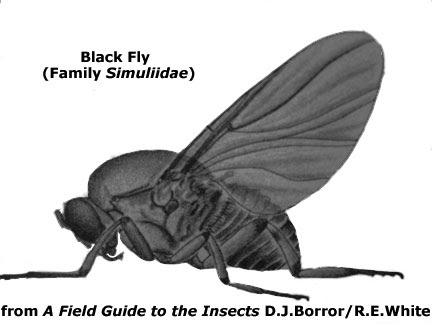 Unlike this photo, black flies are very small. They are less than 4 mm long. Black flies, according to the natives of Labrador, come out when the ice melts in the spring and don't disappear until freeze up in the fall. In between spring and fall they are always hungry. The female flies, like the mosquitoes, are the ones that bite. The bite is often unnoticeable until the fly leaves and then the itch and pain starts and the blood starts to flow. It just so happens that the black flies like to lay their eggs in rapid moving water so, when one is in or near moving water, one can count on black flies attacking. They liked me! In my attempt, at the end of the trip, to count the black fly bite marks I gave up counting at 150 bites and that was on my left forearm. Both of my arms and both of my legs were covered with bites and they were swollen. When I got home, the doctor put me on antihistamines for two weeks to help bring down the swelling. Since that trip, I tend to react a lot more to both black fly bites and mosquito bites and get large swelling at the bite marks. That was one part of the adventure that I did not like at all! 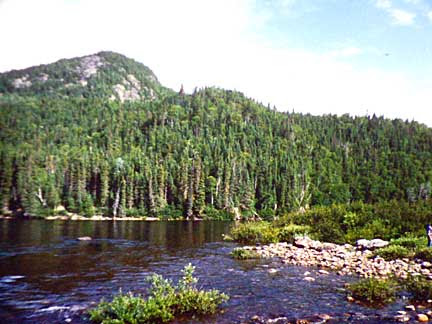 Meanwhile, when the flies were not biting, the river was beautiful and at our lunch stop I found an unexpected flower. This Blue Flag is a type of wild Iris that grows in Labrador. 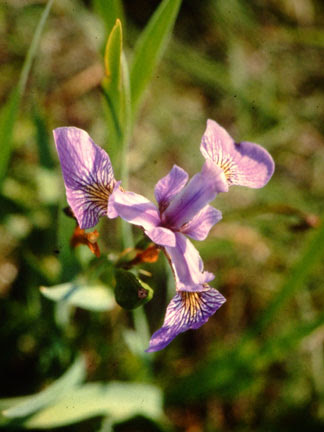 After paddling along rock and brush covered shores for two days, all of us except to the trip leader, were astounded to find a sandy beach waiting for us at the end of the second day's paddle. 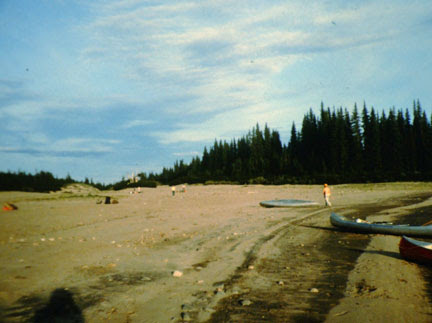 We were told to enjoy the sleep on the sand and hope for fair weather as we had a 20 mile paddle ahead of us on day 3. We were crossing a long lake with almost no place to pull off due to the steep rocky shoreline. If the wind was in the wrong direction, the trip leader told us we would have to stay put as once we committed to paddle, there was no safe place to pull out and camp until we got to the other end. Meanwhile, the sunset was calm and wonderful. We hoped for the same weather the next day. 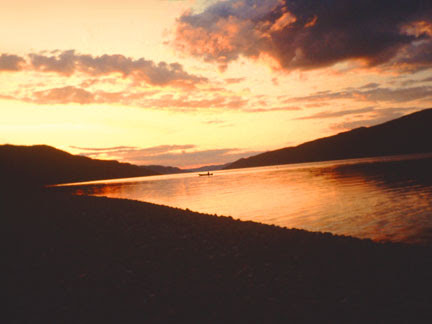 Boy, oh boy, oh boy. I am envious. (Except for the black flies.) I would love a trip like this.

I could make an on topic commment, but then how would you know that Ms. K is here for the week-end? We've just had a yellow breakfast of peaches, scrambled eggs, and yellow butter on Grandma's homebaked bread. (Which of course was in the oven when she arrived, "cuzz she leaves no time for any time-consuming activity of mine once she hits the door!) I strongly recommend this grandparent trip. Adopt, if you can. There are loads of kids who would benefit from your attention. (And the best part: you get to send them home.) Now she is lining up yellow ducks next to the keyboard between trips to the window to watch the goldfinch. Cheers!

OW-- You were taking photographs of stunning sunsets way back when! Gorgeous reflected light there. Still a wonderful serene trip, except for those black flies.

Are things about to change? With a sunset like that, how could the next day not be perfect for a 20 mile paddle? I wonder.

The trip sounds idyllic, except for those black flies. Little bitey things are the thorn in many a rose, it seems.

P, It was a great trip. I am sure you would have enjoyed most of it.

KR, We have kind of adopted 3.

RD, Glad that I am keeping you interest. Yes, changes will come along in due time.

SGJ, Little bitey things were in the background almost all the time. It took the "idyllic" out of some of the trip but I'm still glad I went.

funny how you so enjoyed getting a beach campsite in that rocky land. just the opposite of olson's sentiments when they were searching for the canadian shield.

the grass is always greener, huh?