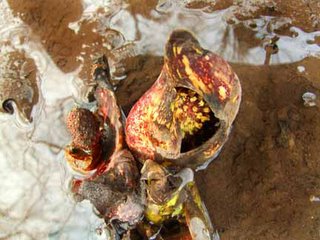 On this Skunk Cabbage (Symplocarpus foetidus) the flowers are on the knob-like projection, called a spadix, inside the hood-like modified leaf, called a spathe. The flowers are under all of that yellow pollen that you can see. This plant has been damaged. You can see the spadix to the left has had it's spathe ripped, or eaten, off of it. I suspect that it was the fact that it was damaged that caused it to bloom early as I have often noticed that damaged or stressed plants will bloom early. This is definitely an early bloom as the earliest that I have ever found Skunk Cabbage in bloom is March 4th in 2000 and 2004. Average blooming time is closer to late March or early April in our area.

The second bloom that I have to show is on a forced willow twig. I collected this twig, along with several other species of twigs, on a bright, snowy, cold January 25th. By February 1, I had a Silver Maple bloom. This is the second twig species to bloom and it just started this week. It is a willow of some sort. I don't know the exact species. 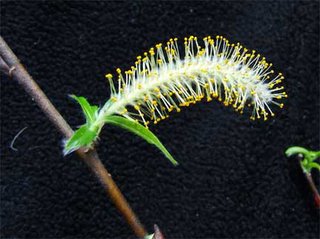 P.S. I had a better write up with a bit more information and larger photos on a previous blog but it disappeared. I hope this one gets through.
Posted by Ontario Wanderer at 4:34 pm

Well, I always wondered what skunk cabbage looked like! I had heard of it but I don't guess we have it down here. I really enjoy your photos; very well done.

Sorry you lost your earlier post. This is the second blogger site i've visited this a.m. that has said that. Must have been a system glitch. I certainly know about those!