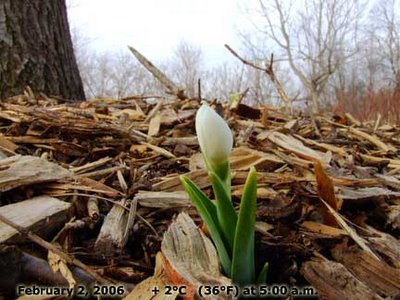 Yesterday I saw 7 plant species in bloom and had another one reported that was growing north of where we live.

I checked the Skunk Cabbage (Symplocarpus foetidus) and found some pushed up out of the mud and water fairly far but none had blooms yet. Under normal circumstances it should not bloom until early March when it can produce enough heat to melt the snow around it. I wonder what will happen this year. 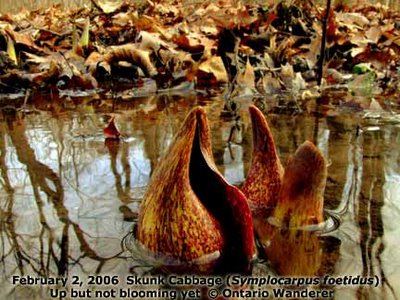 Posted by Ontario Wanderer at 9:15 am

Great pictures. We will have to wait and see how the weather goes. I noticed a tulip coming up in my yard yesterday.

I love the skunk cabbage! Wish I had it here. Is the wild witch hazel leftover from the fall, or is it blooming again? (I thought it was a September bloomer...?)

Rachel, We've already had some tulips come up and be eaten by rabbits.

Rurality, The wild Witch Hazel starts blooming in late September or early October but a few individual shrubs will start late. During the last three years, I have found a few blooms in December, January, and Feburary.

Nice pictures
I am longing for spring now that the snow is off the ground.

Who knows perhaps it will snow tomorrow...

Think I will go out looking for skunk cabbage.

Did you find any Skunk Cabbage? I often find closed shoots up in November so it is always ready to start opening early in spring. I don't know what triggers the opening.