Every year near the end of January or beginning of February I lead a wild flower walk. The aim really is not to find wild flowers in bloom but to identify dried bits of stems, leaves, and fruit as well as looking for signs of next year’s new growth. For the last few years, my partner Églantine has been co-leader. This year, we were joined by 18 other people who were curious about what we all could find and identify. In addition to the many plants that we were able to identify by species or genus, we also found two species in bloom. 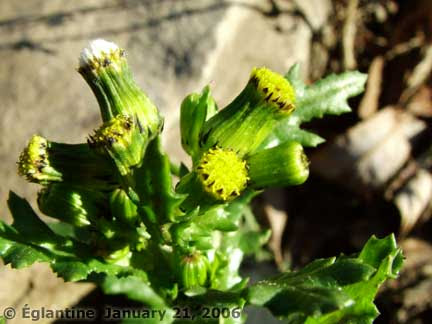 Our first blooming species was Common Groundsel (Senecio vulgaris). It was no surprise as I have found this plant blooming in every month of the year. It does not happen every year but if one looks carefully, one may find it blooming at unexpected times and places. 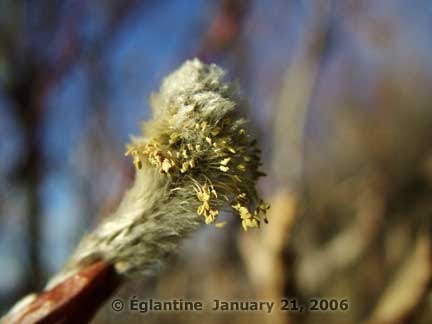 This single blossoming stem on a Pussy Willow shrub (Salix discolor) was the other bloom of the day. I have never found this shrub in bloom before March before and the average date for first blooms in our area is mid April so this one was really out of season.

Although we were out looking for flowers, a few birds also caught our attention. There was a Bald Eagle flying over the open Hamilton Harbour. (Most years, one can find iceboats on the harbour at this time of year.) The eagle caught us by surprise and no one got a photo. On the other hand, Églantine caught this Double-crested Cormorant just emerging from an unsuccessful fishing dive. 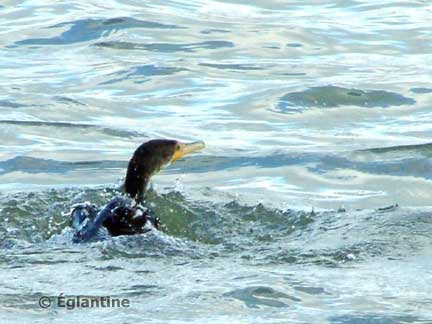 At this time of year, the cormorants should be on the Atlantic coast or near the Gulf coast i.e. Texas, Louisiana Mississippi, Alabama, or Florida. 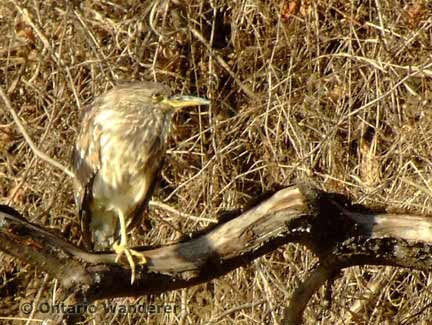 I managed to get a photo of a juvenile Black-crowned Night-Heron. It too should be with the cormorants on the Atlantic or Gulf coasts now. With not only the Hamilton Harbour, at the tip of Lake Ontario, but also the local marsh being water instead of ice-filled I suspect that there are other birds that did not bother to go south this year. 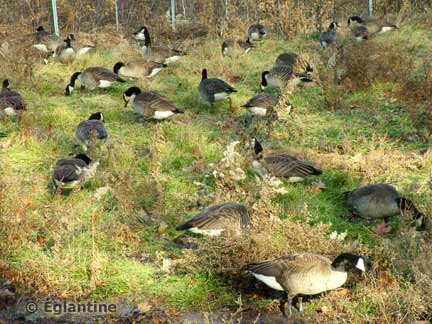 This last bird photo was taken by Églantine. She was intrigued by the number and arrangement of Canadian Geese in the field. We have Canadian Geese that stay the winter all the time now regardless of snow or cold but obviously they have easy pickings without snow right now.

PS
Églantine just informed me that she has not seen iceboats and didn't know what they looked like. Somewhere, among hundreds and hundreds of mixed slides, I have some photos but it's a lot easier, if you want to see a photo, to put "iceboat" into the Google image search. I found over 6000 hits with many photos better than mine there.
Posted by Ontario Wanderer at 9:19 am

The birds are behaving oddly here, too - quite a few migrant species are now wintering here instead of heading off to Africa for the winter months. As that bitter Russian weatherfront now seems to be heading our way, I'm concerned about the fate of these overstayers should the weather suddenly take an extreme cold turn.

It's a little spooky, isn't it? I've seen three swans this past weekend, on the shore near Pickering, that may have been Tundra Swans (some have been spotted near Belleville) and surely they would normally be bobbing about the Atlantic coast.
Great pic of the Heron!

OW--Have you noticed less berries remaining on the bushes because of the longer season of residing birds? I believe many of the berries birds eat in spring on their way back up, have already been consumed by winter lingerers this year. I'm wondering about the impact.

SGJ, Birds that stay past their usual migration time are sometimes found frozen in ice.

T, There have been Tundra, Mute, and Trumpeter Swans on Lake Ontario during the last few winters. If you see bright yellow tags in the area of the wings, they are the Trumpeter's that have been reintroduced at Wye Marsh over the last few years.

L, After reading your note, I went out to look at the berry situation here. I'll post my findings on the Whorled Leaves blog sometime later this week, but in two words, "yes, less."