Sheet Lightning and a Slug

OK, the sheet lightning and the slug did not happen on the same day and I did not get a photo or video of the sheet lightning. The sheet lightning was this morning. When I checked to see if my memory of the term was correct I found that it is correct but also called heat lightning. In either case, it is just lightning that is so far away that it only light the clouds and no thunder is heard so it's like a sheet of light crossing the sky in silence. There was a lot this morning and it seemed to be coming from several directions but mostly in the west so I suspect we might get some of the regular lightning, thunder and rain sometime in the near future.

The slug? I found it last Thursday on a One-seeded Bur Cucumber down by the Grand River. It was eating it's way across a leaf and just happened to be thinking about taking a short cut across an open space when I saw it. 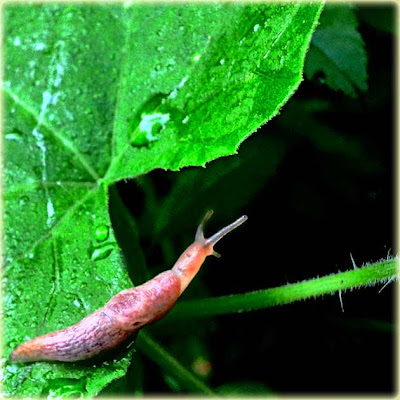 Posted by Ontario Wanderer at 6:05 am

Ah, the best part of blogging, learning something new. I don't remember hearing the term "sheet lightning" before. Interesting phenomenon. We're having thunderstorms and rain here this morning. Not a lot, a certainly not enough to reduce any of the fire dangers.