Sunrise and a Busy Day

We had a beautiful sunrise yesterday! 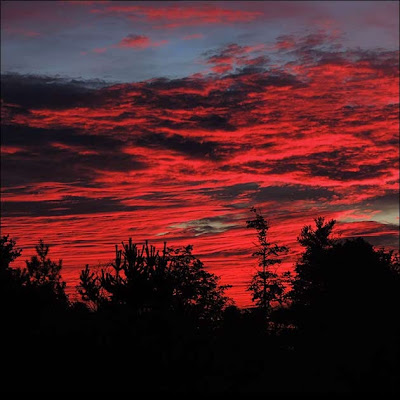 Then the day became very busy. Fleur-Ange and I went to Brantford to participate in the Terry Fox Run. Fleur-Ange biked, as one of the options available. She could have run, biked, walked, or rollerbladed but chose the bike. I did the run. It was supposed to be 10 k but due to an error by the people at the half way  point it was only 8.3 k according to my Garmin's GPS. I had a fairly good run going and felt strong at the finish so I think I could have finished 10 k in a bit over 64 minutes according to my math. As it was, I finished the 8.3 k in 52 minutes and 40 seconds.
After the run, we drove to Eden Mills for a writer's festival where various authors read from some of their works and that was followed by a pot luck there in the home of one of our artist friends.  By the time we got home, with Fleur-Ange driving, I was totally exhausted.

Posted by Ontario Wanderer at 9:42 am

Such a stunning sky. We haven't seen colors like that here for quite a while. Sounds like it was quite a busy and good day.