Yesterday, when I was walking in the wilderness area of the Royal Botanical Gardens's Arboretum, I had the feeling of being watched. Then a movement caught my eye and I saw a deer and another deer and another. In the next minute I saw 4 deer in the area within about 20 metres. While I was standing taking photos two women and a dog came by. The deer quickly melted into the background and became invisible but I told the women about them anyway. As they went down the path, the dog suddenly stopped and looked to the side. The women looked briefly but then hurried on in spite of the dog's obvious interest in what was next to the trail. I followed and looked to see what had attracted the dog and saw 2 more deer that the women had obviously not seen. The deer, however,  was keen to look at me so I got another photo or two. Below is the best one. 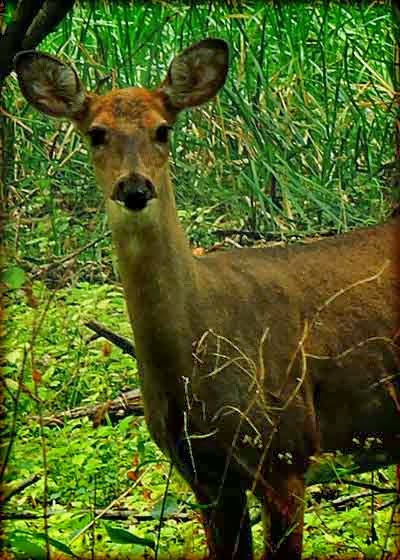 Posted by Ontario Wanderer at 4:31 pm

Nice to see this deer. It's been a while since one looked in our windows like this. I think the pack of coyotes and a mountain lion are keeping "our" deer away.