It is believed that the oldest, free-standing, megalithic, stone "buildings" in the world are the temples on the islands of Gozo and Malta located in the Mediterranean Sea, south of Italy and Sicily, and just north of Libya. It was on Malta and Gozo that Églantine and I went to live, study, sketch, paint, write, and take photos for an "Art Stone Inquiry" led by an Ontario art group called the "Independent Art Inquiries" for the last ten days of March and first two days of April. From the study time we brought back over 5000 digital photos that act as daily photo diaries; art studies, tourist photos, and digital memories that will inform our art and lives in the near future. Although it will be impossible to share everything in this blog, Églantine and I will be able to post some of the highlights of our study and trip over the next few weeks as well as attend to the daily happenings of the emerging spring season back home in Ontario. Feel free to look, comment, make inquiries, and critique our photos and writings both here on the Ontario Wanderer Blog and on our Flickr sites which have links on the right side of this blog. Expect to see mostly OW writing and photos here and many, many more photos on Églantine's Flicker site as she took the majority of photos on the trip.

Following is a bit more background information, from a Malta guidebook, and the beginnings of some of the photos.

Below are two photos of the location of our hotel room in Valetta, the capital city: 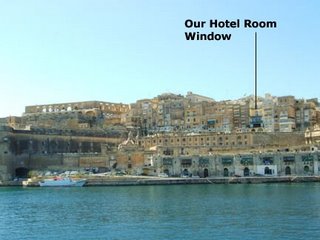 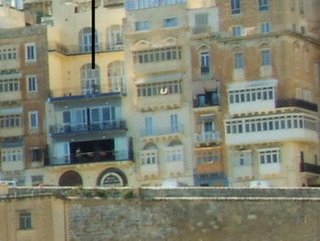 And from our hotel room, this is what we could see. I think we must have been the two luckiest tourists in Malta! 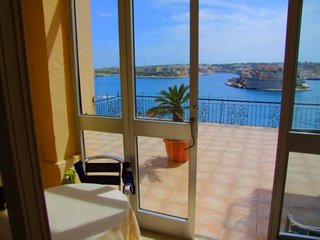 Posted by Ontario Wanderer at 5:03 pm

This sounds fascinating and I'll look forward to reading more. And I'll second that you two must have been the two luckiest tourists in Malta with that view from your hotel room. What a view to wake up to and to enjoy on the porch area anytime of day.

What a lovely place and what a view!! You were certainly lucky to have that room. I'll be looking forward to more.

So glad you're back on line. I'm excited to learn about Malta. What a lovely home base you had there!

Welcome home! Malta looks so beautiful. I am looking forward to your impressions of the journey.

Wow, seriously pretty. Sounds like you had a fine time. Looking forward to hearing more!

eeThanks for all the positive comments and for actually finding me back on line so soon.

Yes, we had a great time and already are planning on going back if we can.

I'd love to go there someday!