On February 29th,1704, Abigail Nims, who was Fleur-Ange’s great-great-great-great-great-great-great-grandmother, was one of 109 (or 112) captives taken by the French and several First Nations people from the English frontier village of Deerfield which later would be part of the state of Massachusetts. Abigail was only 3 at the time so she must have been carried most of the way through the winter snows back to various areas in what would later be called Quebec. As the “Queen Anne’s War” drew to a close, some of the 89 captives who survived the trek to the Montreal area returned to Deerfield but Abigail did not. This year there is a meeting of some of Abigail’s descendants in Deerfield in October. As a special “art project,” Fleur-Ange is planning to do a return walk from Montreal to Deerfield. It will be a roughly 480 kilometre (300 mile) walk. Fleur-Ange has an elementary school friend, Pauline, who plans to do the whole walk with her. In order to cut down on costs of gas and keep us all fairly close to a vehicle on the walk, I plan on doing a shuttle with Fleur-Ange’s van so I will walk a bit, return to the van, drive ahead, return to meet Fleur-Ange and Pauline, then start the procedure over. We expect to start the walk from Montreal on September  3 and arrive in Deerfield on October 1. At this point in time I am looking at Google Earth and Google maps to try to follow, as closely as possible, the route that the captives walked. 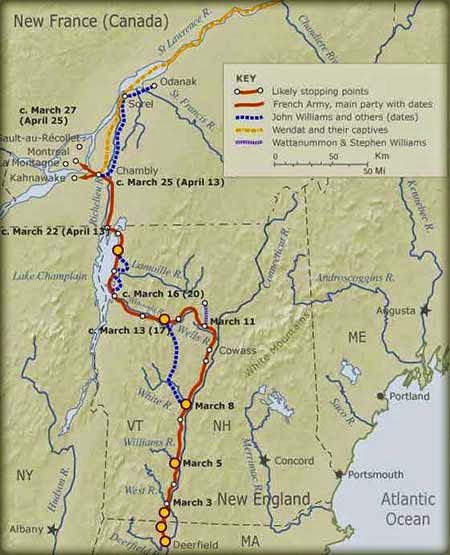 Fleur-Ange is planning on starting a new blog to record her adventures. I will post the address on this blog when she gets started; meanwhile, I am hoping to blog my part in this activity here. So here we go . . . .

So far, we have made arrangements for some people to stay in our house when we are gone to take care of feeding the animals and keeping the house occupied in our absence. I have roughed out the route, have two bed & breakfast reservations for a total of 7 nights, one motel reservation, and campsites for 5 nights. There are lots of other preparations to do in the next two weeks before we drive to Montreal. Busy, busy, busy, . . .

Posted by Ontario Wanderer at 2:25 pm