As I went out on this dark and rainy morning with our dog and my headlamp on, two sets of glowing eyes met us in the yard. Our dog, Sadie, went wild. She pulled at the lead, growled, barked, and whined as she tried to get at that second set of eyes. The first set was our barn cat who was, obviously, not in the barn. I turned my headlamp onto high to have a better look. I decided for Sadie and I that we would continue out into the east meadow rather quickly as the second set of glowing eyes belonged to a cute little black and white skunk kitten who was not at all frightened by the noisy dog.  Sadie was reluctant to leave but, since I have had more experience with skunks than she has, we left anyway. I missed taking a photo as handling a camera and a jumping dog in the rain was a bit too much for me.

Below is the photo that I put together for my Facebook cover for the day. It is a spider web from between two boards in our barn and a carved pumpkin from the  Royal Botanical Garden's pumpkin carving contest that was held last week. They gave the pumpkin 3rd place but I thought it should have had 1st.

This second photo is of two Common Milkweed pods that caught my eye just at dusk last night in our west meadow. Almost all of the flowers in our meadows are gone now. Some goldenrods and asters are still in bloom and a bit of Red Clover as well as one Oxeye Daisy. OK, there are some Black-eyed Susans too and probably a few others that just skipped my mind for now. Over all, I found 60 wild flowers in bloom last week but most of them were next to the Hamilton harbour where the weather is a bit warmer due to the water and they get more light due to street lights. 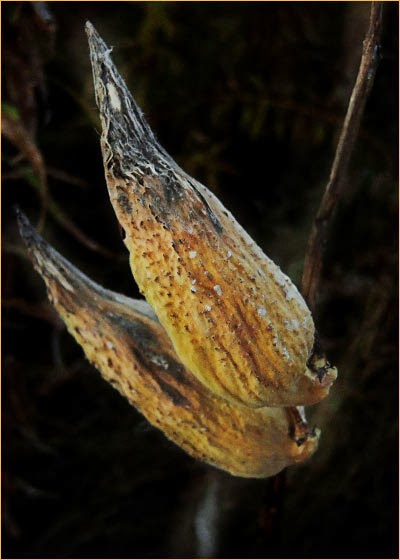 Posted by Ontario Wanderer at 4:51 pm