I do not know why I decided to try to run another marathon. I ran my last one nine years ago when I was 66 and have since found that even 30 k races were challenging. For whatever reason, I decided that this year, when I was 75, that I would run another and I would run at a slow, measured pace with lots of walking involved. Since I was planning to go slow, several other people in the running club said that they would go with me; however, by the time I started training at the end of June almost all of them had reasons why they could not run. I took on the challenge anyway.

By mid October I was doing my short, i.e. 6k, runs on a treadmill in the gym. That kept me out of the October rains and meant that I could run during the day as I do not drive after dark anymore if I can avoid it. Below is a photo of my last run last Wednesday. 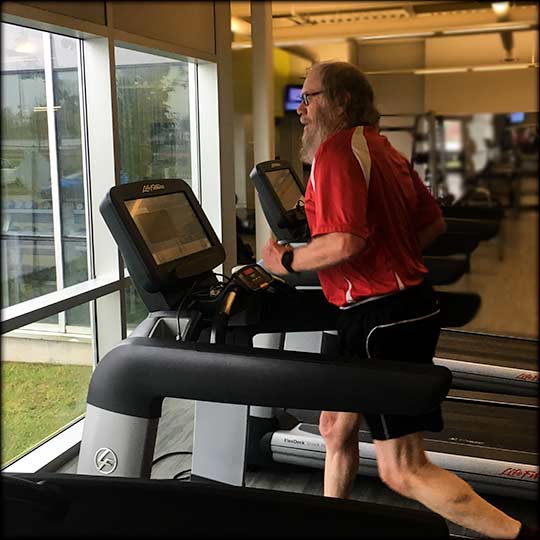 The Road-to-Hope Marathon run was yesterday, November 4th, 2018. I have run the Run-to-Hope races since they began 11 years ago. So up to yesterday I had done one full marathon and nine half-marathons. Below is a photo of this years start of the half-marathon. 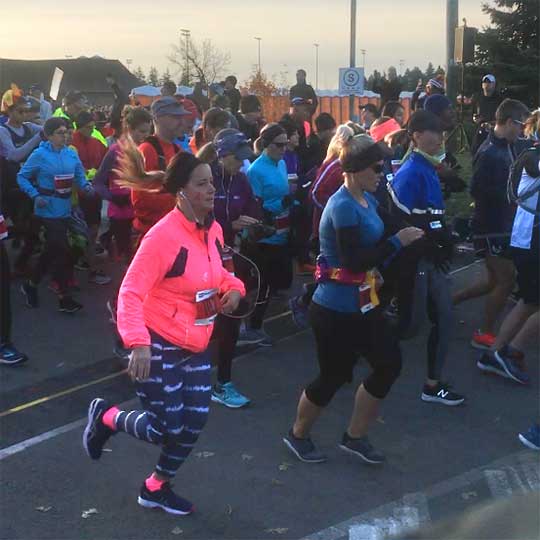 I have found, in the past, that if I am running in a race anyone that passes me seems to pull part of my energy away leaving me with less than I had before. On the other hand, if I can pass someone else, it gives me a bit of a boost. Therefore I always start in the back part of the pack. Given my age and the marathon distance that I wanted to cover I decided to start at the very back of the group on this run. As it turned out, I was not able to be the very last but I certainly was within the last 20 and finding it difficult to hold back even though I knew it was best. I was running 1 minute then walking 30 seconds, then running 1 minute . . . and hoped to do that for most of the race. Walking after only one minute at the beginning of the race was very difficult for me as I wanted to move. OK, I did cheat a bit and only walked 20 seconds a few times at the beginning. Nevertheless, I was soon well back of the main group as expected. The photo below is about 3 k from the beginning. I could still see the main group even though the leaders were well out of sight. 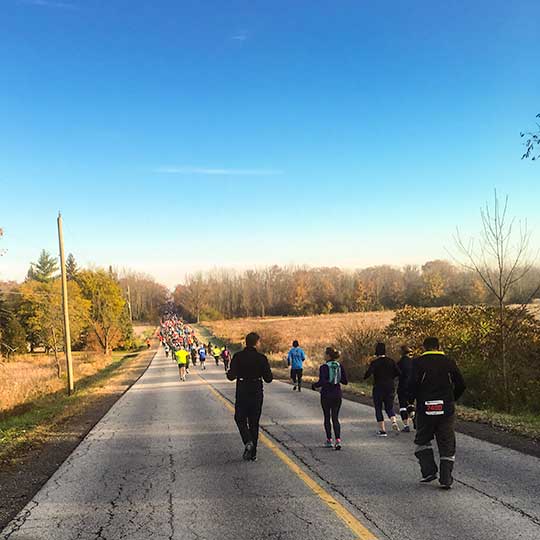 By the end of 6 k, I could only see 4 or 5 people ahead of me as the main group had disappeared into the distance. I did not then, or ever, look behind me. By 10 k there was only 3 people in sight. I had not passed anyone but had been passed by 2 people. By 23 k I could only see 1 or sometimes 2 people ahead of me. I had not seen the Red Hill Expressway  looking so deserted. In the photo below I could see one runner and three of the support medics that were cruising back and fourth on bicycles. 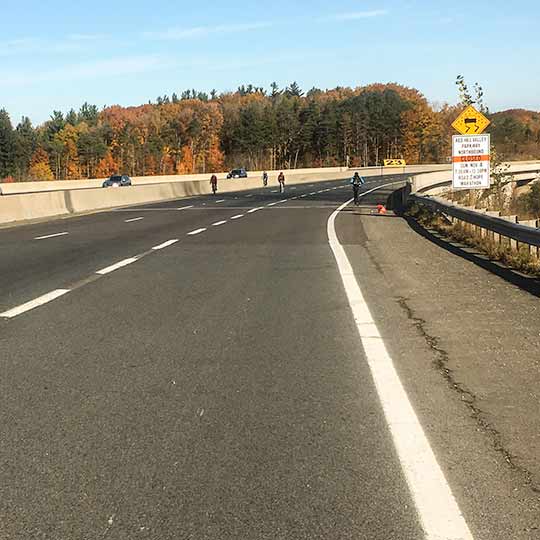 At about the 25 k mark, Ian Slater, one of the running club members who had helped me train during the summer, suddenly appeared. He had parked at the finish line and found his way by side streets to the the 25 k mark. (I later thought it was at the 20 k mark but I guess I was already not thinking too clearly. That does happen when I run long distances.) Anyway, Ian joined me and ran with me for the last 17 km. That gave him a run of around 25 k by the time he ran to meet me and then came back the official route. He took the photo below somewhere around 35 k I think. 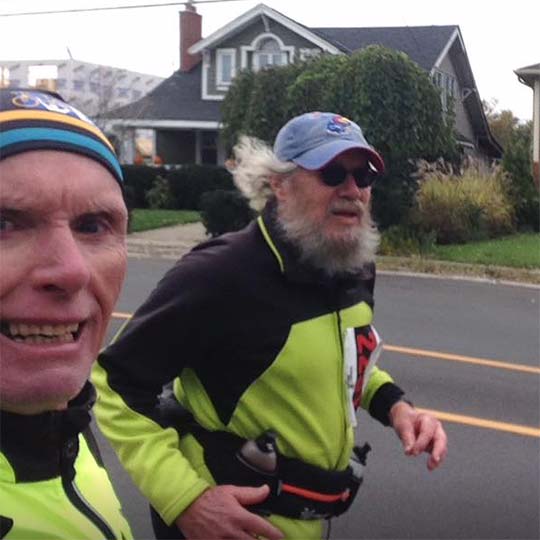 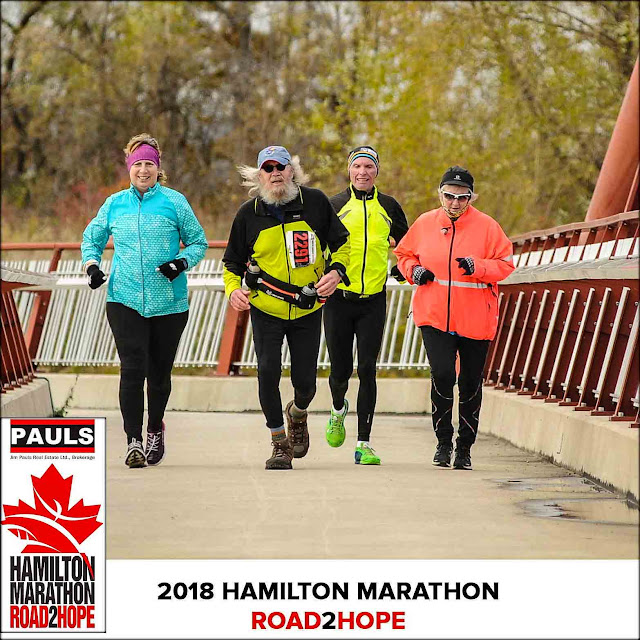 I was surprised again at about the 30 k mark when Donna Quick and Leslee Peart-Mcalister, two more people from the run club, joined me to support my run. I think it was Donna that gave me a couple of Tums to help settle my stomach as by then I was having difficulty taking in any of my food supplies without getting stomach problems. They ran 2 or 3 k with me then dropped off to wait for me to finish a loop by the lake and then joined me again for the last several k to get me to the end. In the photo below, you can see the waves coming in as the 22 k winds were blowing the 6 degree air over the race course. At this point, the people waiting to see me come in were getting colder than I. 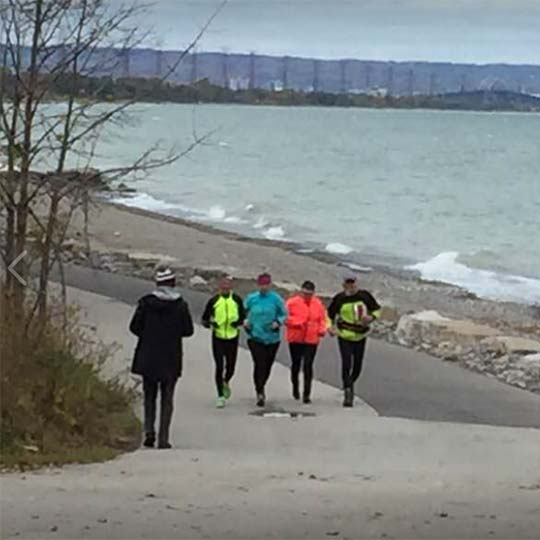 Fleur-Ange Lamothe, my long-suffering partner, who drove me to the beginning of the race and then waited around for well over five hours for me to show up again on the course was waiting for me at the end as well as some other members of the run club. I cannot believe how much support I had in doing this run! 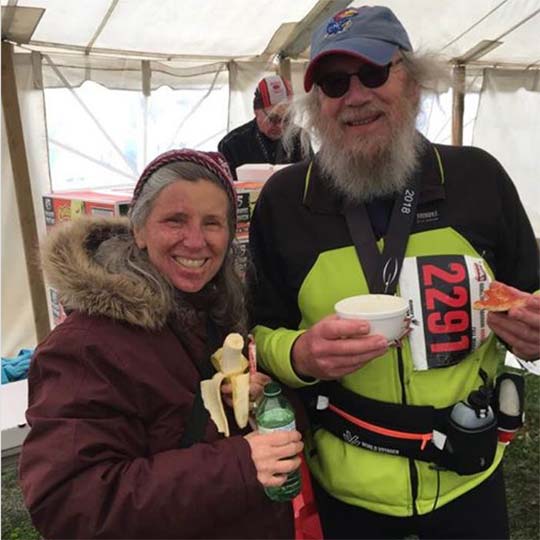 Donna Quick checked her iPhone to see what my time and place was as the typed list of finishers was not being updated by the time I finished. I was very happy to find that I had finished 2nd of the 75 to 79 age group of men. Donna scouted around and found a person to bring my 2nd place metal. 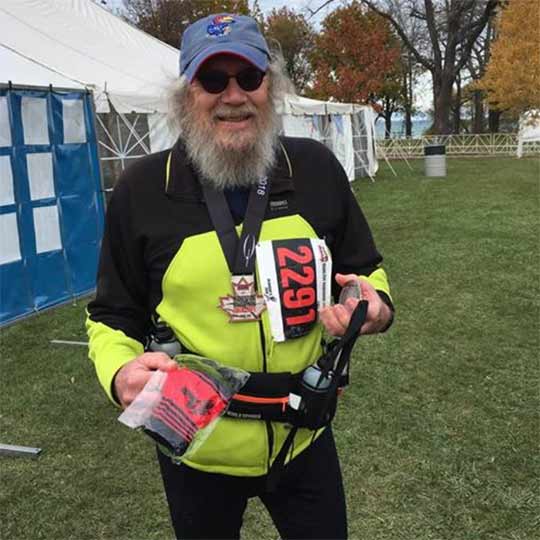 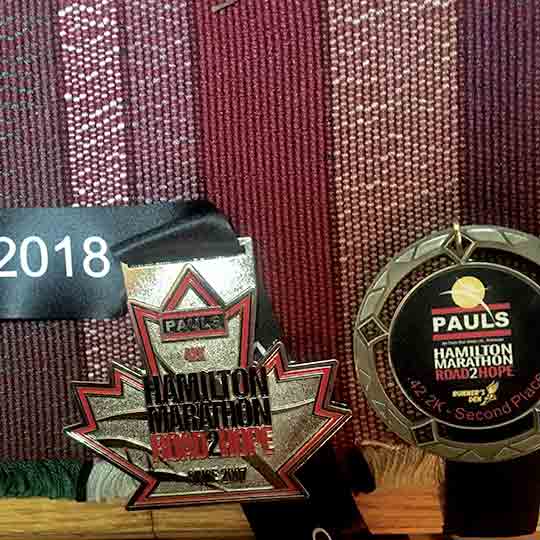 Posted by Ontario Wanderer at 6:19 pm