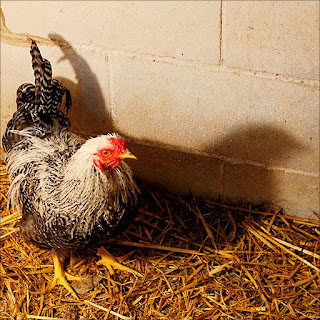 Here is the first photo of our new rooster. Names suggested so far include Rudy, Roary, Ko-ko-dee. Do you have suggestions?
Posted by Ontario Wanderer at 2:38 pm

OK, leaning toward Speckles right now as that just about describes him best. He is not very aggressive and probably has a few more speckles now as he is a bit henpecked in a real way. He seems to be avoiding the hens by staying high on the perch or above the nest boxes. I shall give it another day or so and discuss it with Fleur-Ange and then make a decision.

If anyone else has suggestions . . .

He's a beauty! It's funny abut animal names... We have a cat named Bonsai, but we hardly ever call him that. We do call him these names: Bonboy, Bonnie, Mr B, B-man, Bonaroo, Bee, Old man, KitKatKing, and Bondel. I think the rooster will ultimately name himself. His personality will have you calling him something that suits him.

He has lots of Speckles. Looks like it fits. Handsome fellow too

So, what is the Rooster's name?

He is still not officially named but we seem to have migrated from Speckles to a definite leaning toward Ko-ko-dee.