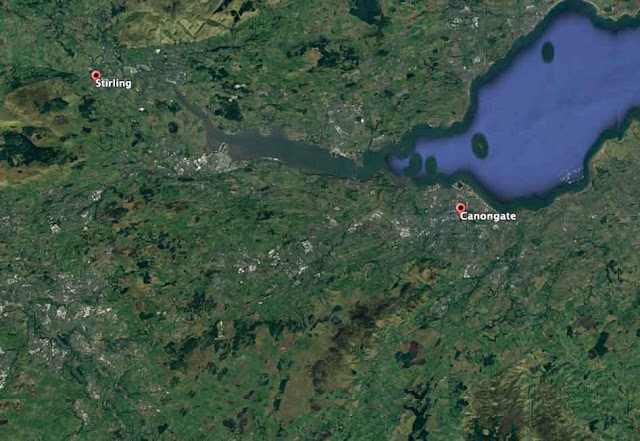 According to the "Geordie" text, Geordie sent a young boy from Canongate to Sterling with a letter to his wife who was in Sterling. He leaves at the end of 209.F4 and arrives at the beginning of 209F5. The boy arrives "baith weet and weary" in time for supper. I am not surprised that he is wet and weary as a 50 km walk, run or horse ride would take some time and effort.

(Having just participated in a trail run where some men and women ran 50 km on trails, I have some appreciation of the effort. I did 1/4 of the run, i.e. 12.5 km and that was a bit of a challenge for me. The winners of the 50 km run did the distance in about 4 hours but I am thinking that distance in Scotland would take a bit longer plus the 50 km was a crow's flight path not the path of a person through hills and bogs which would have been longer.)

Following are some photos taken by a variety of people of some of the scenery between Canongate and Sterling and posted on Google Earth. The names of the photographers are on the photos. None are mine. I have taken the liberty of subtracting some "modern" buildings from the original photos so the areas look more like what would have been present in earlier days 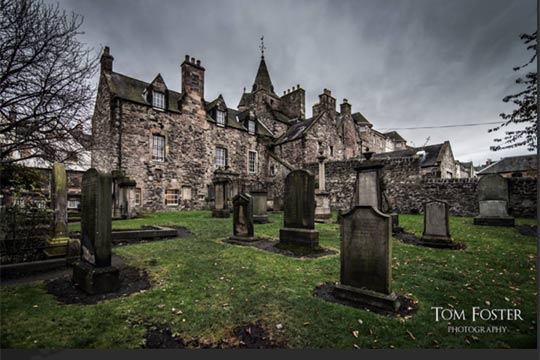 Canongate Tolbooth
This building was built in 1591
It was a toll booth for the road going into Edinburgh
It was also the courthouse and burgh jail
So it would have been the place where Geordie
would have been, if the 209F ballad were based on truth. 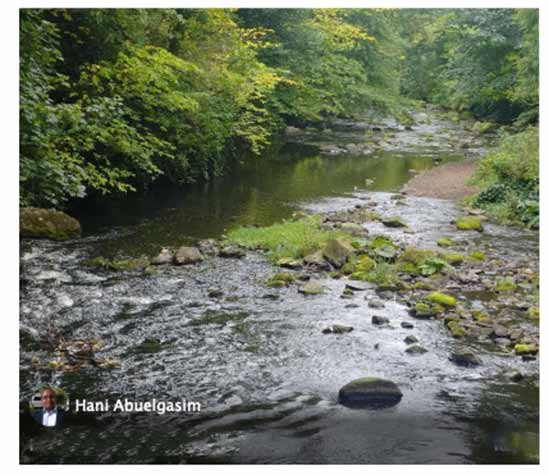 On the walk/ride to Sterling, there would have been many, many streams to cross. This one was just a a few miles west of Canongate. 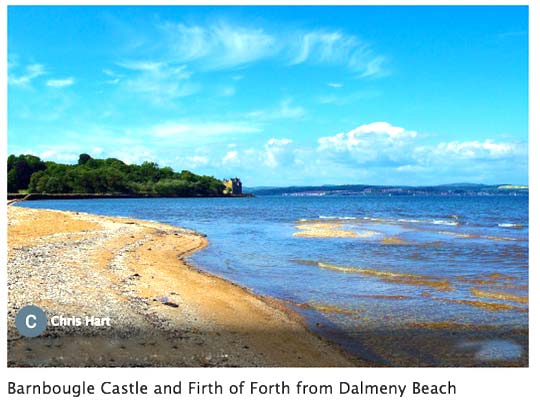 Barnbougle Castle was first built in the 13th century and was about 10 km west of Canongate. The body of water, called the "Firth of Forth" is a long fjord that was left from the last glacial period. Almost the entire distance from Canongate to Sterling is first along the firth and then along the Forth river. 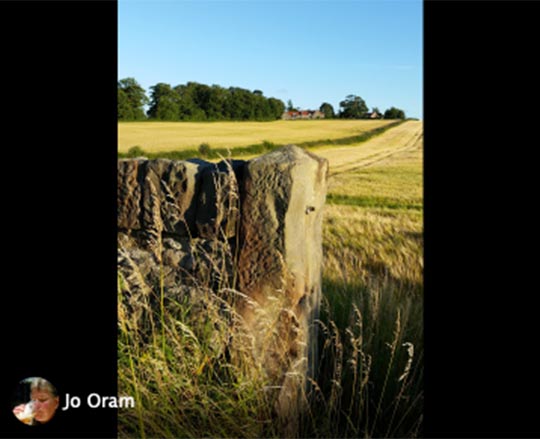 Much of the distance between Canongate and Sterling must have been through fields near the edge of the firth. 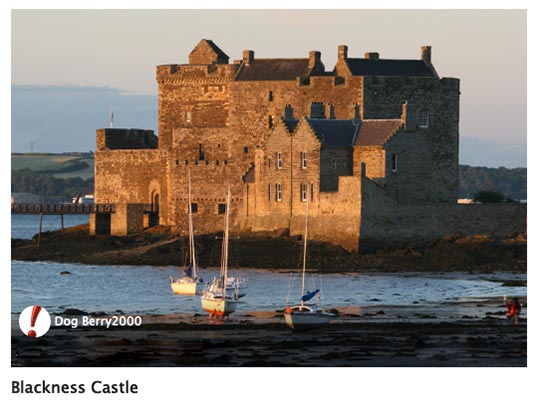 Blackness Castle was built in the 15th century. (Sorry about the modern sailboats. They were too much work to take out quickly.) The castle was on the edge of the firth and just over 20 km from Canongate. It is on a bit of a spit into the firth so it might have been a bit out of the way for the trip to Sterling but then it might have been a good lunch stop. 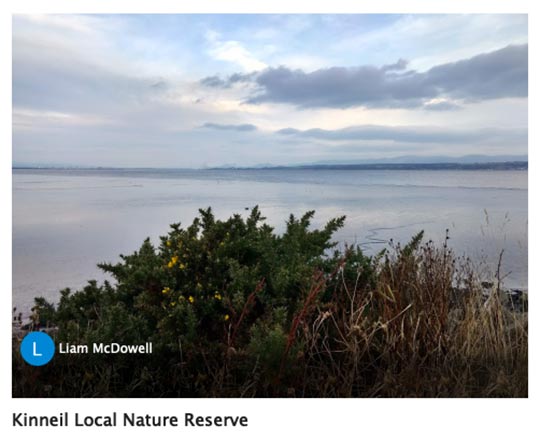 It spite of how it looks, the firth is getting narrower. This area is about 30 km from Canongate. Only 20 km to go to get to Sterling. 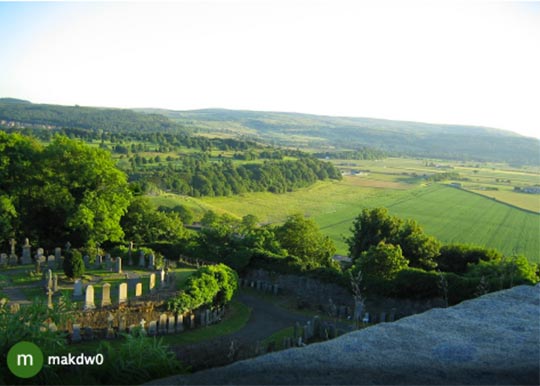 This area is only 8 kilometres away from Sterling. The Forth River flows into the firth less than a kilometre away from here. 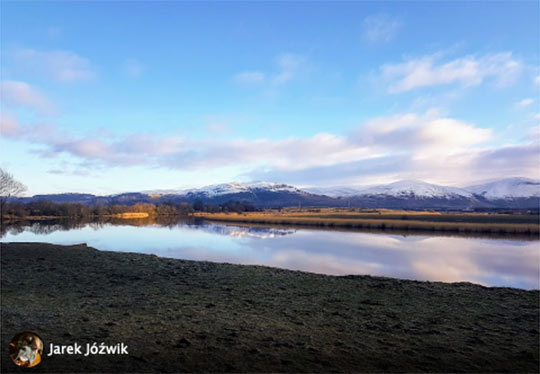 This is the Forth River only a kilometre from Sterling. The hills in the background are larger now. 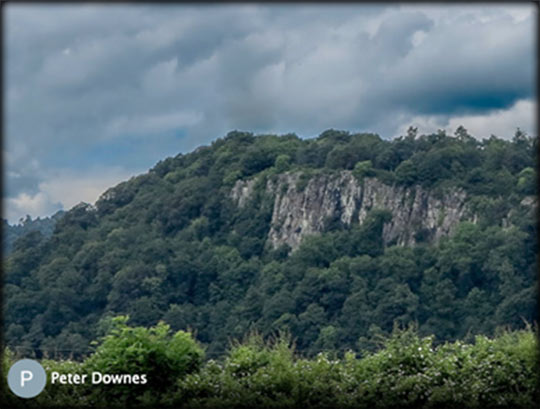 When I found this photo, there was an old looking monument at the top of the cliff that overlooks the city of Sterling. When I discovered that it was actually built in the late 1800's I removed it. However, it was built to commemorate Sir William Wallace who was born around 1270 so he would have been a Scottish hero during Geordie's time so there is that connection.

Not much time is spent lingering in Sterling as the heroine of the ballad leaves in 209F.7 and leaps to Canongate in 209F.8 to plead for the life of Geordie. (You can look at the photos in reverse order for her pony ride.)

In this version, she is successful at saving Geordie. Yea!

Posted by Ontario Wanderer at 7:40 pm

Great Idea. Distance in folktales seems to be elastic.

Nicely done. Good for you for running. I've had to give that up.