I missed the sunrise this morning but did capture this photo from the bus window as we sped along the highway up to ski country. 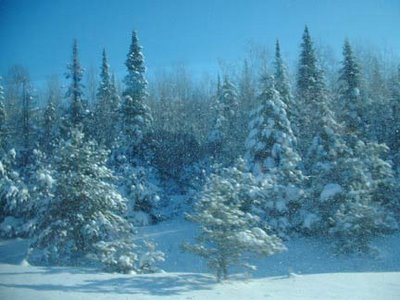 As you can see from this photo, all the skiers were stopping often to look at the amazing snow on the trees and shrubs. 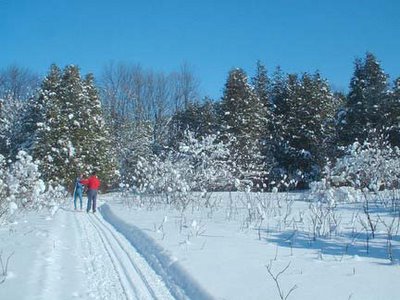 Conditions have to be just right for snow to land and stay in trees like this. There can not be a hint of wind and the snow has to be light but a little sticky. The name for this kind of snow is "Qali." For other names for snow look here and here. 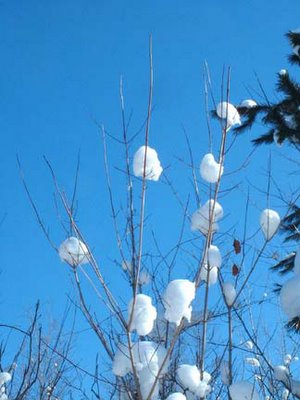 Here is another trail photo. You can see that the trails we were on for this Saturday ski were often narrow, single tracked, and with trees close by on either side. (For those in the Whorled Leaves reading group, Susan Cooper in her May 3rd entry writes about the Beech trees keeping their leaves all winter. The orangy-brown leaves showing up in this photo are beech. The bright yellow-green needles are on White Cedar trees.) 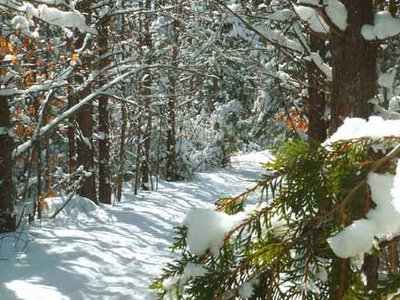 For those of us who went to school on buses, we were told, time and time again, to stay in our seats while the bus is in motion. Adults sometimes think the rules don't apply to them. This was the result of a fall that an adult, who should have known better, had on our ski bus on the way home yesterday. 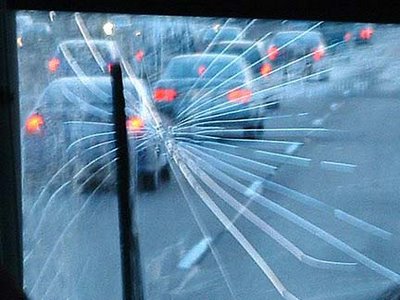 The bus had to brake suddenly, not unexpectedly on a six lane highway with lots of traffic, and the man who was standing to put something into an overhead bin lost his balance and fell against the front window of the bus. It could have been much worse! Imagine if his hard head would have hit the bus driver! Actually, I don't want to think too much about that. As far as I know, the only damage done was the cracked front windscreen on the right side of the bus and a bump on the head. As I said, it could have been much, much worse.
Posted by Ontario Wanderer at 10:31 am

That first picture looks like it could be the inside of one of those snow globes! Gorgeous.

What a beautiful place to ski. The photographs capture the serene quiet of the snowy landscape.

That poor fellow learned his bus lesson the hard way.

R, And I missed even better photos as I was sleeping for part of the trip up and when I woke it took a while to find the camera.

RD, Yes, it was a beautiful ski area and I skied for about an hour in the afternoon without seeing or hearing any other person or road noises. That does not happen too often any more.

So many stories could be written about the cracked windshield shot. Before I read the circumstances I thought it was a comment on mans addiction to cars and commuting.