Here are three photos from our group art show opening. 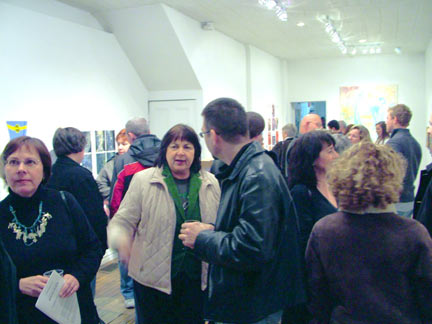 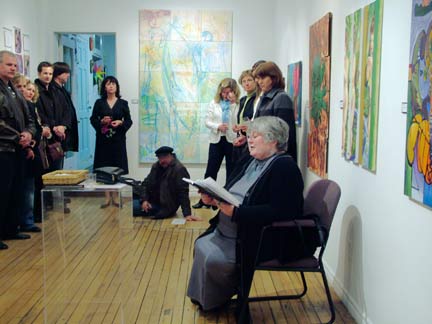 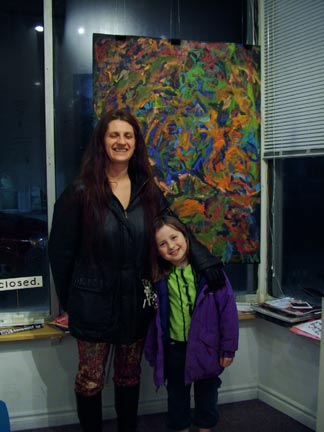 The last photo shows the model behind Églantine's "Wild Woman of the Woods" series of paintings. Have a look at Églantine's Flickr set for the paintings.

It may be a bit of time before I have time to post again. Sorry 'bout that. Some times are busier than others and this is one of those times. (Can one retire from retirement and still be alive to enjoy?)
Posted by Ontario Wanderer at 5:16 am 5 comments:

The news from CBC today was that the Canadian winter was 3.9°C warmer than the average winter from the time records across Canada were reported in 1948.

Yesterday afternoon I sat on our front steps in my tee-shirt, without a coat, and cranked an ice cream freezer while listening to Spring Peepers calling from the pond. This morning we had a snowstorm. 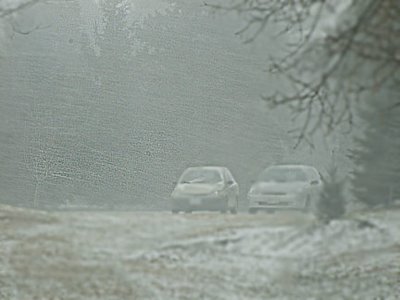 This evening I can hear American Woodcocks doing their mating call. What will the weather be doing next?
Posted by Ontario Wanderer at 7:12 pm 7 comments:

There were record breaking temperatures here today. My thermometer said + 17°C (63°F). Our "lawn" is a wet mess. 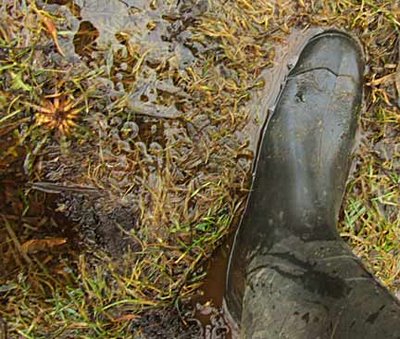 Our next door neighbour, whom I still have not met, was out in his flying wing today. 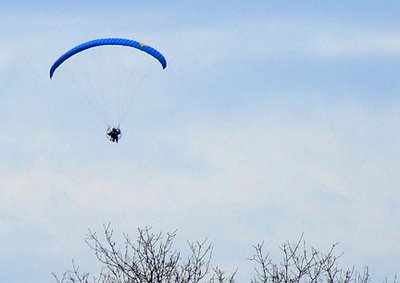 Our smaller neighbours were out too. 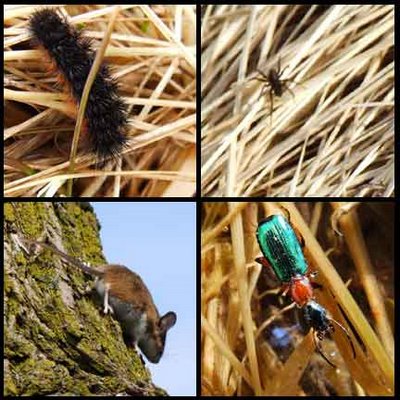 Getting ready for a major art course as well as the art show for the last course. Blogs may slow to a trickle and then stop for a while.

Meanwhile, we frightened up the first American Woodcock of the season on Friday and on Saturday I heard the first Killdeers of the season and, I think, heard some Tundra Swans high overhead. I am not positive about the swans as I never did find them with my binoculars but I was 95 percent sure of the sounds.

Snowdrops are coming up in my flower garden and tulips are poking up in various places. I doubt that the snow is gone for good but it sure is great to see a bit of green here and there.
Posted by Ontario Wanderer at 5:11 am 3 comments:

The Red-winged Blackbirds have returned from the souther migration range to our area. They arrived yesterday, March 9th and were in full song this morning. Because the sky was so dark with clouds and drizzle my photo is not very good but I was so pleased to see the Red-wings back from the south that I wanted to post this photo anyway. 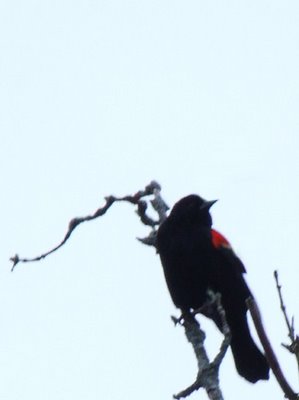 Between the two of us, Églantine and Ontario Wanderer have had five paintings chosen to be displayed at Hamilton, Ontario's "you me gallery" between March 17 and 26. We were part of an Enhanced Studio class at the Dundas Valley School of Art and the show is a partial display of works by the twelve participants. The class was led by V. Jane Gordon and participants worked on indvividual projects.

All of the works in the gallery show will be on an "art-in-canada" web site after the show. I will post the address at that time. 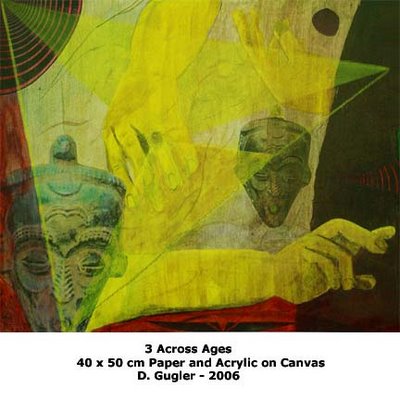 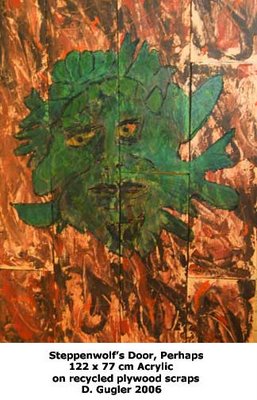 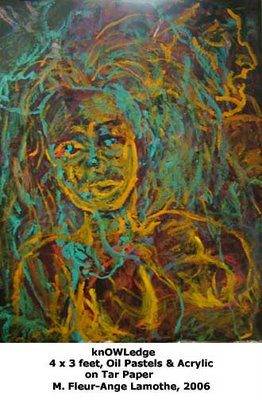 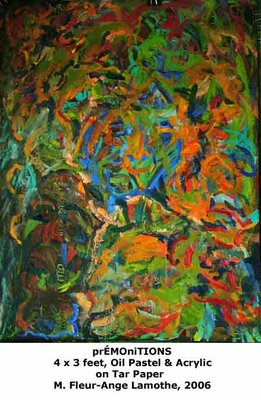 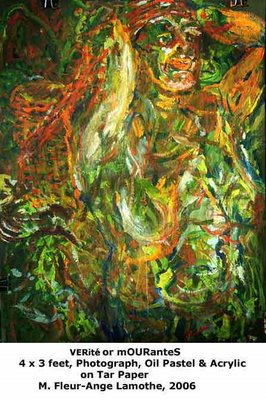 Having left many tracks on Sunday, I though I would post some other tracks today. 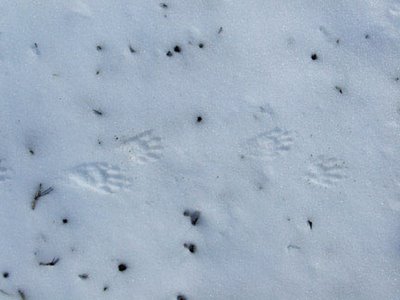 I am sure that these are raccoon tracks and they are near sunflower seed shells as the racoon was attempting to steal from my birdfeeder again. It was unsucessful this time. 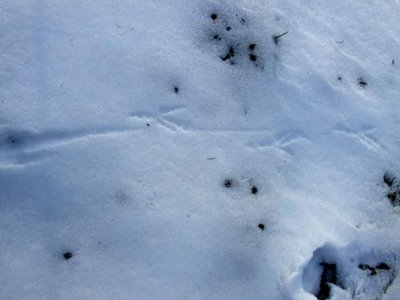 By size and shape and toe drag, I am assuming these are crow tracks. I am open to corrections if anyone knows better than I. 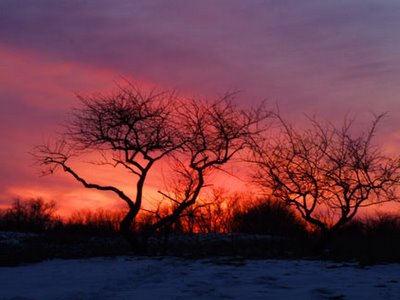 I am calling this one "Sun Tracks" as it is left behind the setting sun.
Posted by Ontario Wanderer at 9:35 am 6 comments:

A Good Day for a Run

It was a beautiful, sunny, clear, fairly calm day with no snow. I think all 2000 people that were signed up for the run were there and close to me. I do like my privacy. 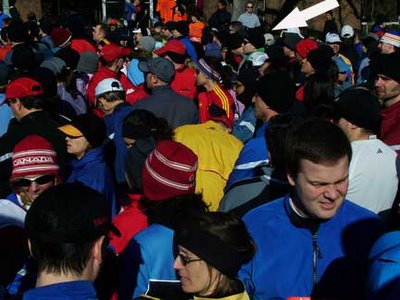 Did the starting gun go off? I never did hear it. Were there instructions? I could not hear them. Was the group starting to move at a walking pace? Yes. I went too. Then a slow jog started. Me too. Then there was a mat across the street. I did not see it. My foot caught it. Down I went, with only about 1000 people right behind me. Good thing I spent so many years working with gymnastics when I was younger. I hit the street, did a quick forward ankle-over-teakettle roll and was on my feet again with only a slight twisted ankle and stinging knee and hand. Four more steps and one of my two water bottles escaped my belt and tumbled to the street. Remember those 1000 people behind me. I left the bottle for them. The run route twisted and turned through beautiful residential streets for several kilometres and then stretched out as far as I could see in a straight line. My feet started to hurt by about 10 km but I felt a lot better than the person lying at the side of the street at 11 km. I heard the ambulance come for them as I kept running. I didn't want that ambulance to come for me. My plan was to run 10 minutes, walk 1 minute, run 10, etc. I manage to do that until about 14 km but by then my feet felt like they were running on hot coals. Are we having fun yet? For much of the rest of the run, I ran when I could and walked when I needed too and forgot the watch. I was still finished, yes, I finished, within the time frame that I had set for myself. 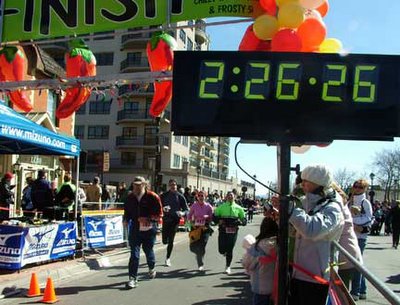 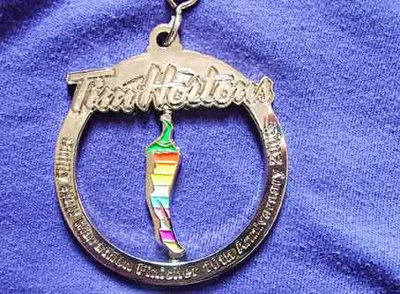 The snow has done some interesting things as it starts to melt. Here are three examples. The first photo is of snow on a post that has melted into the shape of some sort of animal lying on top of the post. 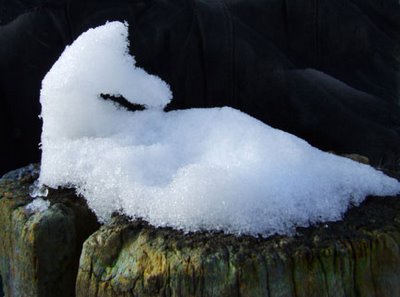 Next you can see the results of a setting sun putting light on a rabbit track that is about 36 hours old. 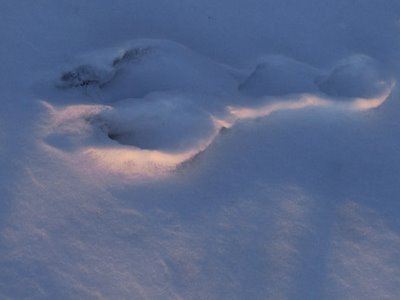 And the last photo is of frost crystals hanging onto some grass in a snowbank. (Églantine lay down on the snow to take this photo. Ontario Wanderer is not quite keen enough to do that, yet.) 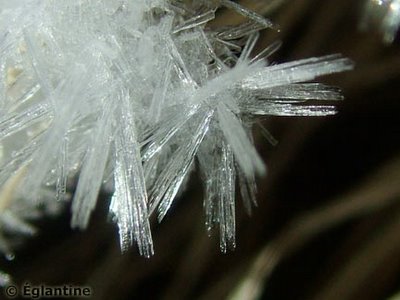 In Burlington, Ontario, about 30 km east of us, they have no snow. Here in the eastern part of Brant County, we had about 14 cm (5.5 in.)of snow yesterday. Below is the view from our north window. (You can still see a bit of the patterned frost that I posted yesterday, on the top window.) 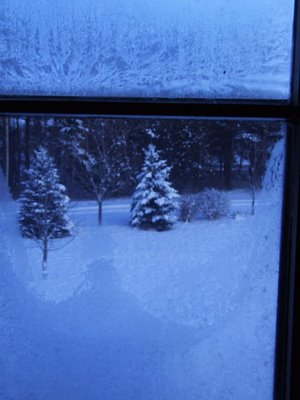 The willow in the photo below is several hundred metres west of our house in a damp ravine. 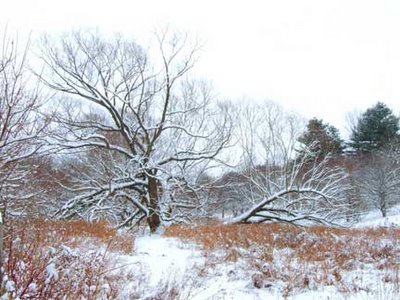 In this last photo, one can see some Goldfinches on one of our bird feeders just outside our kitchen window. 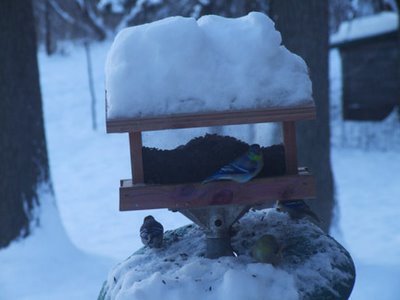 Sorry that photos 1 & 3 are a bit dark. They were taken early in the morning just before sunrise.
Posted by Ontario Wanderer at 5:55 pm 4 comments:

We had snow today, and lots of it, but I was gone most of the day and have not had time to sort out the photos so here are two from yesterday.

Below is a photo of a grape vine tendril hanging onto a Black Walnut leaf stem. 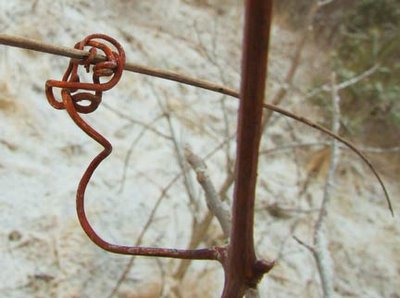 Next are two photos merged into one. I have buds from two Hawthorn trees on the photo. The twig with buds on the bottom of the photo was taken from another photo by Photoshop and pasted on. 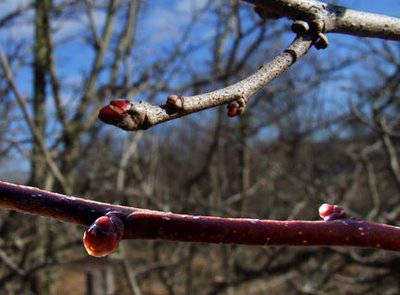 Temperatures are cold again and the frost on the north windows of our house is forming neat patterns. 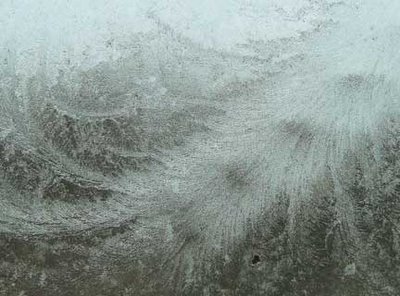