Wandering from London to the Lake District

On day two of our trip, I stopped at the train station to purchase tickets for our trip from Sevenoaks to the place where we were going on our walking holiday in the Lake District. The ticket agent was very meticulous and checked not only the electronic information but also the paper files and also went to check with a supervisor or at least someone else in the back office. He typed information into the computer one finger at a time and held his finger over the key while he checked back to his source material. In spite of all that, he did make an error and had to start over at one point. I was beginning to think it might be faster to walk to the Lake District than wait for the ticket but I was wrong. Anyway, we got our tickets which took us 1. by train to London, 2. by subway from one train station to another, 3. by train to somewhere up north, and 4. by a local small train to Windermere train station. From there we were on our own to either take a taxi or bus to Monk Coniston, the Holiday Fellowship house where we were booked in for a walking holiday. Since our train travel day was a Saturday, we did not have to put up with the usual weekday commuters and our trip through the London subway system was not too bad except for hauling heavy suitcases up and down steps. At least it was not too crowded at 8:00 in the morning.

When we got off the train at Windermere, we discovered that the cash machines in the village did not take our debit or credit cards. We had just enough cash to make the bus trip but not much more. The bus was a standard size bus like one might see in the U.S. or Canada but the roads were not much larger than a single lane. Due to hedges and stone walls at the sides of the roads, we had to stop often to let cars or trucks inch by the large bus on the narrow roads and at one point three cars had to back up to a wider spot in the road for the bus to inch past. When one adds a few pedestrians and bike riders to the mix, it was a bit of an adventurous ride on the bus.

Églantine spotted the sign for Monk Coniston as we rode along the road and asked the bus driver if he would stop to let us off. As we were 2 of only 3 people on the bus, it was no problem so her quick thinking saved us a mile walk back to the house.

Below is a photo of the main house of Monk Coniston. 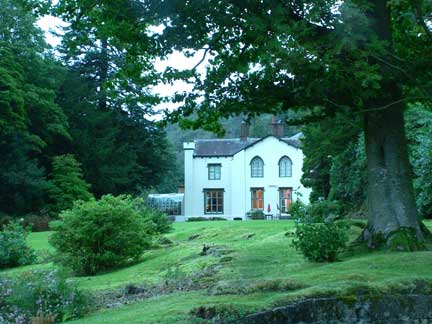 Monk Coniston is a National Trust building that once belonged to Beatrix Potter of Peter Rabbit fame. In its earlier life, the house was an abbey where monks stayed to oversee a large plot of land and farmers rented the land. We did not stay in the main house but in the counting house where the farmers came to pay the monks their yearly rent. Our room was behind the window on the second floor on the right. 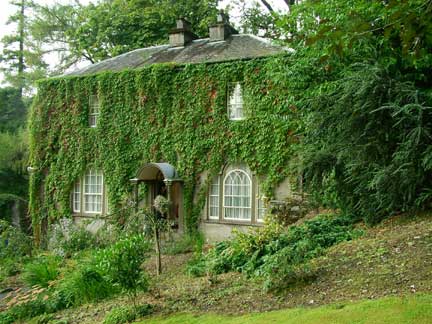 The yard, in front of the main house, overlooked the village of Coniston and the body of water called Conistonwater. (A trivia question given by one of the hike leaders was, "How many lakes are in the lake district?" The answer was, "one." Only one body of water has the name lake. All the rest are "mere's" or "waters.") In the photo below, Conistonwater is hidden behind the trees.

The organization that we booked our holiday with is called "HF Holidays."

Teachers' Travel Service Ltd. of Toronto Canada is the HF North American Representative if you are interested (email: info@teacherstravel.com). I'll give the URL's again after the end of this series of blogs.

Here is a second view from the front yard of Monk Coniston. This one shows Conistonwater and some of the hills that we walked on our holiday.

Posted by Ontario Wanderer at 6:17 pm

This brings back memories from when I went on a walking 'tour' around the southern coast of England which was really just myself, a gal pal, and a map. But its just such different land, isn't it? I remember thinking how different it was from hiking around Ontario which seemed positively wild and treacherous by comparison. I did love it, though, and found it very beautiful with its bucolic, pastoral hills and misty air. It was my first introduction to another country's 'country'....

Good for you, taking on England with just a map. I always get nervous when the trails go through someone's front yard.

The north of England is more rugged but certainly not wild like Ontario.

For truly "wild" in the UK you need to go north, to the highlands and islands of Scotland. It doesn't get much wilder than an Orkney island in a gale. Ultima Thule ...

I've hiked some of the "Munroes" in the north and climbed Ben Nevis in a wind strong enough that we were clinging to boulders to keep from being blown off the mountain at times. Wild indeed, but a different wild from Ontario and northern Canada. Here the bush is often so thick one cannot move forward without extreme difficulty, unless one happens to be a grizzly bear...that's a different wild than rocks and wind in the northern U.K. And then there are the tundra and bogs of the North and.... Sorry, just a bit of one-upmanship.

Thanks for this sharing, i hope, one day, it will be my turn to visit the
wonderful Monk Coniston city
i will note this travel angency address,
thanks again !!!