Had someone asked me, six months ago, if I had a hearing problem I would have said, “Yes, because so many sounds are too loud.” I always go to the side of the exercise room away from the speakers and, in some classes, I put in my swimming ear plugs to deaden the noise a bit. I do most of my birding by ear rather than by sight as I hear and recognize many bird calls. The spring frog songs almost hurt my ears with their volume. I have no difficulty hearing most conversations . . . if there is not a crowd around.

OK, so there is that little problem. One of the reasons that I took early retirement over 20 years ago now was because I was having more and more problems hearing individual children in the classroom over the general buzz of classroom noise. Currently it seems to me that Fleur-Ange is harder and harder for me to understand and my boss at one of my part time volunteer jobs also seems to mumble a lot. I can hear both of them but often cannot understand what they are saying. Then there is my computer driven French lessons where I often have no clue what the speaker is saying in French even though when I see the words written I have no difficulty understanding meaning. 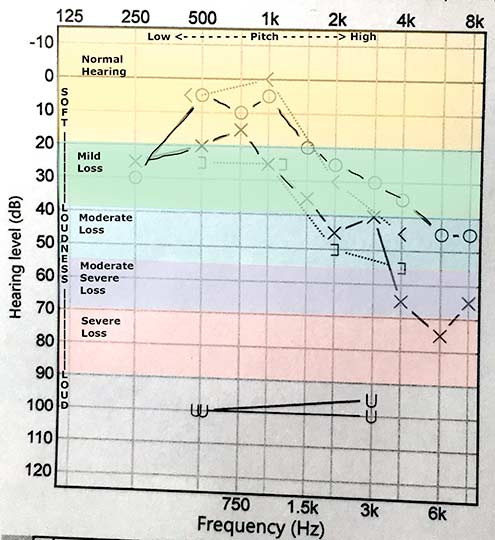 So it appears that I cannot hear sounds with high pitches unless very loud with the greatest loss being in my left ear. (The X’s on the chart.)

I now have new hearing aids. Some changes that I have noticed include the following:

I can now hear and understand most of what Fleur-Ange says to me;
The French sounds on my computer lessons are much sharper;
The dog’s nails make loud scratching sounds on the floor;
Pouring water into a glass makes a loud sound now;
I can hear the fabric of my socks as they slide onto my feet;
My raincoat and rain pants are really noisy when I put them on and walk;
Music has much clearer sounds;
The microwave makes a high static like sound that I have never heard before;
The American Woodcocks that I have not been hearing are now calling every morning;
The computer mouse makes a scratching sound as it moves on the desk;
Movement of paper or plastic makes a much louder sound now;
All sounds seem to be a bit more crisp and clear.
(My bank account has taken a rather large loss. Hoping for insurance help soon.)

Overall the experience is much like that I had 70 years ago when I got my first eyeglasses and discovered that one could see pebbles on the ground, rocks in the pasture, and leaves on trees without moving closer to them. There is a whole new world out there to be discovered and enjoyed . . . or be annoyed about.

I have not been to the gym yet with my new ears. Wondering what that will be like . . . .

Posted by Ontario Wanderer at 12:10 pm

I really hope they help! There are so many wonderful new products out there.
My hubby has a 30% hearing loss, maybe from working in a factory? Hearing aids are not an option for him.

Well written. I have has hearing aids for 3-4 years now. I can hear certain bird sounds much better,
Phyllis Tiffany