We had lots of wind all day yesterday. It ranged between 35 to 45 km/hr most of the day with gusts to 65. It continued all night and is still in the 35 to 50 km/hr range this morning so wind chill has been a constant factor when going outside. If it had been a normal winter, it would not feel so cold but since we have been above freezing for most of January, the winds of February are digging down to the bone. 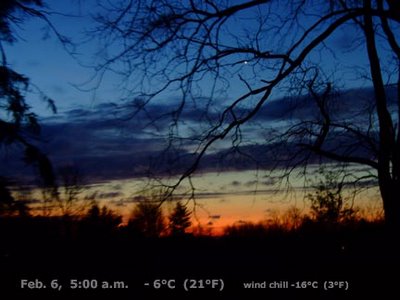 Jupiter is still high in the southeast in the early hours of morning. According to
the Space Weather web site, Venus should be showing up brightly in the east also. Since we have trees on our eastern horizon, and clouds too this morning, I did not see it yet.

There were lots of fox, deer, and rodent tracks in the fresh snow this morning but by the time I got Calla on the lead and was out where I could see them, my fingers were too numb to take photos. I did stop at the door and take a photo of some small drifts and the snow in the back yard but when I looked at the photo, I decided to crop out the tiny drifts and just show my developing sculpture and the back shed where the dog and cats stay out of the cold winds. The sculpture still has various parts to be added but so far there are two circles of stone, an old truck motor, a circular rim and some bits of metal that have come together. That, plus the old shed with bones and antlers on it looked more interesting to me than the tiny snow drifts. I'll look for other drifts on the road when I get out. 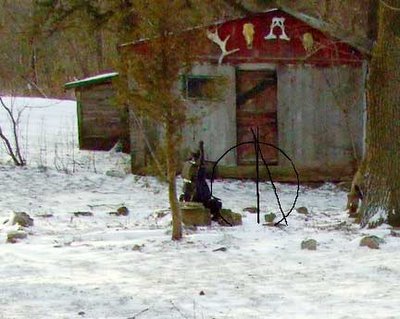 Posted by Ontario Wanderer at 9:07 am

Seems I'm always the last to know. All those trips to the dump that I made were to get rid of art supplies? Hm. . .

Morning sky is beautiful. My camera keeps turning out nearly black shots... perhaps it is the skill of the photographer? HAH

Beautiful morning sky with jupiter. Those winds can really sink into the bones, can't they? Hope you get clear skies and calm weather. We had a windstorm on Saturday that blew 60 mph gusts. The upside is that they blew away the clouds and we're having some sunny weather for a change.

according to the temp maps at niches, those of us in the pacific northwest are the only people in north america having a "normal" winter. maybe even a bit colder than average.

that cold wind does bite right thru lots of layers of clothing.

Kr, There is landscape art and sculptural art. I think you were working on landscape art. On the other hand, yes, there are lots of art supplies at the dump. Actually, the area inside the large circle of stones was full of "useful stuff" before I did some sorting and moving. It's just that I could not move that motor other than turning it up on end.

E, Play with the aperture and shutter speed if you can. If you have one of those automatic cameras, they often allow you to press the shutter button half way down to set the focus and exposure. If you put the focus area on the sky or ground to set the focus and then move the focus area to the colour, you might get the photo you want. Play is the answer to most digital shots. Then there is Picasa or Photoshop to help it along. Picasa is free if you don't have it.

RD and DPR We heard that you had some wind out your way. There was also a major winter storm north of us on the Tobermory Peninsula on the weekend. I heard that there were still 50 000 people without electricity on Tuesday after the Saturday afternoon storm. There must be a lot of cold people up there!